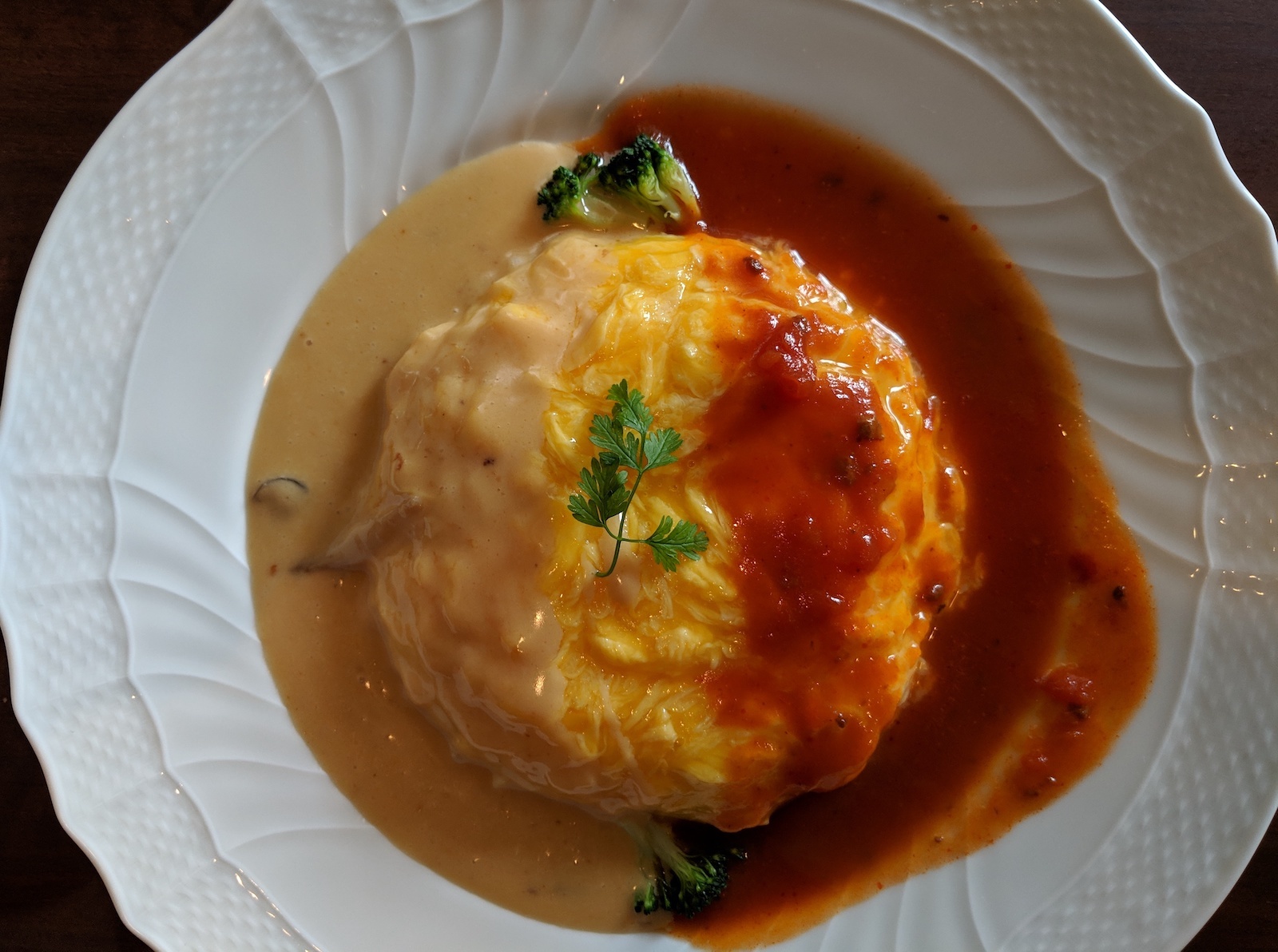 Have you ever had omurice? It’s a thin yet fluffy omelet, runny on the inside topped on fried rice then drizzled with a homemade ketchup, or wait, doused with a special sauce that can range from a savory demi-glace or a velvety cream sauce. If you were to look in the dictionary under “comfort food”, no doubt, a picture of omurice would be there. I (Carl) have always had this dream of executing this perfect omurice, a football shaped omelet and when cut down the center, unfolds and reveals this waterfall of flowing soft scramble over the rice. It’s what my dreams are made of. Simple in its ingredients but difficult to execute. Being able to do it is the equivalent of Phil Mickelson performing one of his miracle flop shots in golf or Steph Curry showcasing his handles on the court leaving his defender behind on next step. The amount of finesse one needs to make an omurice omelet is so high, it’s mastery. This is the year I am going to execute this dish. I am determined to at least get close to the jedis of the kitchen who perform this dish almost every day.

The first time we experienced, and I mean it was an experience, omurice was on our last day in Osaka, Japan in Spring of 2018. We had just gotten back from taking the parents to the airport and it was late afternoon when we arrived at the unassuming, easy to miss but well known Muguni. When we stepped in, we were surprised at how cozy (no more than 10 seats max) the bar like restaurant was. We each ordered a half/half and patiently waited as classical music played via a television in the corner of the bar. Despite specializing in such a simple dish as omurice, Muguni had such an elegant hush to it, that I wasn’t surprised when our order arrived as beautifully as it did.

This vibrant pool of half cream and half tomato sauce glistened over a somehow super thin but creamy egg blanketed over fluffy rice that just soaked up all the flavors. You got the earthy mushroomy almost buttery gorgonzola sauce that hugged your tongue and then the sweet brightness of the tomato sauce came through. It was the most decadent, savory, luxurious, fully flavored and textured dish I would never have expected from an omelette rice.

Omurice in the Bay Area

We haven’t had omurice since then so we set out to find some spots here in the bay area to give us a refresher. We weren’t expecting it to be the same as Muguni, but we wanted to see how our home’s omurice game was. The research stage of finding spots was showing itself to be difficult: it was either an overcooked egg omelet on top of rice or some kind of Korean fusion dish with regular scrambled egg on top from what the pictures looked. It was one of those moments where you really have to admire and respect how Japan has this culture of mastering their craft because most of the restaurants we looked up here in the bay had omurice almost as an after thought. Almost half of these restaurants trying to be some one stop shop of all things asian food. Sad.. The most promising spots we found were in the Oakland and Berkeley area so we headed out and got ready for a big lunch!

Our first stop was Kitchen Story in Oakland that had a tornado style omurice topped with demi-glace over a bed of galbi fried rice. Short of plopping a regular ole omelete on rice, the tornado style omurice is the easiest of the omurice styles to execute BUT its still pretty freaking hard to do! Their execution was well done, the sauce, although not enough, was quite rich and flavorful. The eggs were fluffy, I wouldn’t say runny as it was fully set but definitely not overdone. I also feel because of covid times it would be difficult to give them an evaluation in that category as a lot of places are doing take away only and we don’t know how long it was sitting in its container before we got to it. Also, because of the current times, take away is pretty much the only way of getting food from restaurants.

We have seen many reviews from customers complaining about the freshness or the overcookedness of their food, but you are ordering takeout! There are not many foods that travel well or even take away very well, so please take that into consideration before bashing a restaurant in reviews for something they don’t necessarily have control over once that food is in that container. Things can continue to steam or cook in the to-go container, steam from the hot food can de-crisp or de-crunch fried foods leaving them soggy just like the steam from our omurice could have continued to cook the top layer of the dish making it unqualified for our ideal omurice, but that doesn’t make it a bad dish! Rant over, thank you! The galbi fried rice from Kitchen Story was very delicious and with a good amount of vegetables that did not look like it came out of some frozen precut bag of veggies! Our Kitchen Story omurice was a good start to this adventure.

Next stop, Berkeley Bowl for Dela Curo Curry, but unfortunately they were nowhere to be found. Despite an active Instagram with a broken web link and our attempts at reaching out for their pop-up schedule on instagram only to receive a “👍”. It was on our list because they are known for their black curry where you have an option of adding omurice to it and it looked pretty promising but unfortunately we did not get to try it! The search continues for a good omurice spot here in the Bay, if you know of any, let us know in the comments or message us on Cene!

Even though we only found 1 of the 2 spots of omurice here, it was a good reminder for our end goal or ideal omurice is at least texturally and visually. We want the thin omelet to be fluffy, the inside to be like a soft scramble so it oozes over the rice, speaking of rice we want it to be flavorful but not overpowering and the same goes for the sauce. We also want there to be a lot of sauce just like the ones we had at Muguni. As far as shape, we want to go with the football shape as it is the most difficult to get but I am determined to be able to do it.

There are a ton of combination we can do with the omurice, we can make the fried rice different flavors like spam fried rice giving a bit of salute to my Filipino background! We will try making different sauces from cheese sauce to curry sauce, and even our own homemade ketchup. Like I said, the combinations are limitless but what is most important to me is being able to execute the technique. The goal other than delicious food is being able to level up my finesse in the kitchen because that technique doesn’t stop at omurice. Technique can always be transferred over to different dishes or even creating new ones and that is what is so fun about cooking! Hoping you all join us on this journey of being able to create a beautiful omurice. Wish us luck!