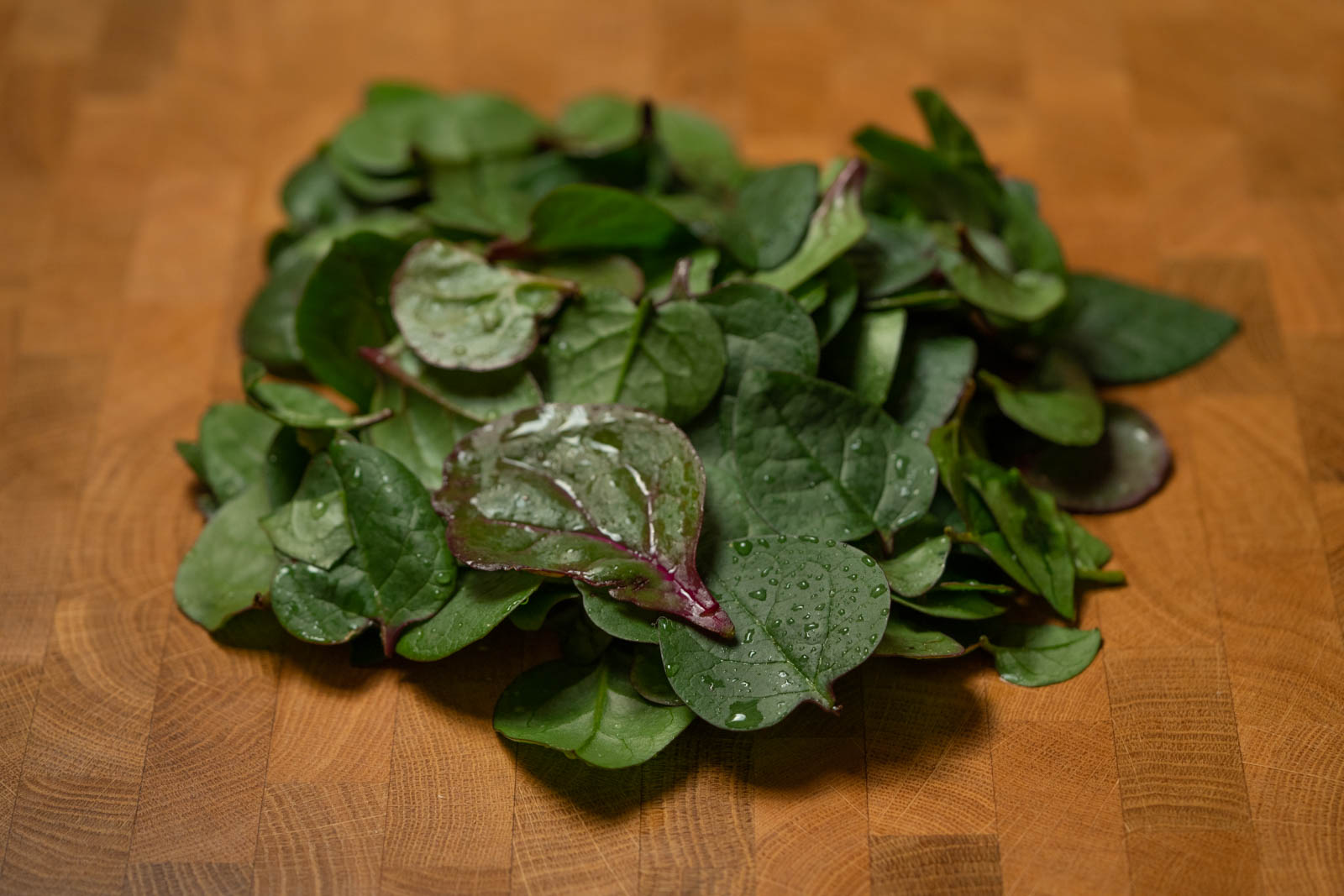 One day we received a text from a close friend who owns and runs a farm about 2 hours from us. They asked us if we wanted any of their leafy green vegetables that they have been growing and of of course we wouldn’t say no! We received things like broccoli stems, mint, basil, scotch bonnet peppers and Malabar spinach, the last one was something completely unfamiliar to us. We did a quick check to see “is Malabar spinach harmful to eat raw?” and with the all clear we gave it a tiny tear to see how strong it was, a pinch to see how thick it was, a nibble to see what it tasted like and then decided that it needed to be a “WTF is this” episode! So let’s get started!

Where’d This Thing Come From?

Malabar spinach is found in tropical areas of Asia and Africa where it’s used as any leafy vegetable, similar to a spinach though it’s not actually related to the common spinach (Spinacia oleracea). We’re lucky to have gotten malabar spinach from a friend as we have yet to see it in any local markets. If it were to show up, it would most likely be in your ethnic grocery or even farmers markets.

There are 2 different types of malabar spinach: one that’s completely green, known as Basella Alba, and one with reddish-purple stems that bleed into its green leaves, called Basella Rubra. It is rich in vitamins A and C, iron, and calcium and even has antioxidant properties. This spinach is safe to consume cooked or raw!

Malabar spinach loves growing in hot temperature, it thrives in it! If you decide to grow it yourself just know it is a vine so make sure to support it with a structure to climb. You can grow it from seed or cuttings. You can grow it in part shade, which supposedly increases the size of the leaf, but it does prefer full sun exposure. Since you eat both the leaf and the stem, you can harvest when the main stem is starting to grow well. Like the common spinach, Malabar spinach does not keep well: it will keep for 2 to 5 days in the fridge. To keep it longer, cut a 1/2 inch off the bottom of the stem and place in a container with water, like how you would with fresh flowers.

Because the Malabar spinach is tougher and thicker than the common spinach, it can withstand the heat of cooking, which makes it ideal for soups and stir fries. When eaten raw it has a slight crunchiness and a hint of Lemon and pepper. Upon closer inspection of a leaf when bitten or torn, you might notice a secretion that reminds us a little of aloe vera. According to Google that is called mucilage (a polysaccharide substance extracted as a viscous or gelatinous solution from plant roots, seeds, etc.). This isn’t nearly as slimy as the nagaimo, so if that was a turn off for ya, this guy isn’t like that!

Many Asian dishes use Malabar spinach in soups, stews, and stir fries and also used in many types of dishes in India from dumplings and fritters, to gravies and curries. Try it in a crispy pancake like our Malabar Spinach & Kimchi Korean Pancakes. It’s is also pleasant to eat raw in a salad because the flavor profile brings citrus and earthy tones to it, which pairs well with fruit, like in this Malabar Spinach & Nectarine Salad. In true WTF fashion we want to showcase its versatility, one cooked malabar spinach and one raw. Check out our recipes below. 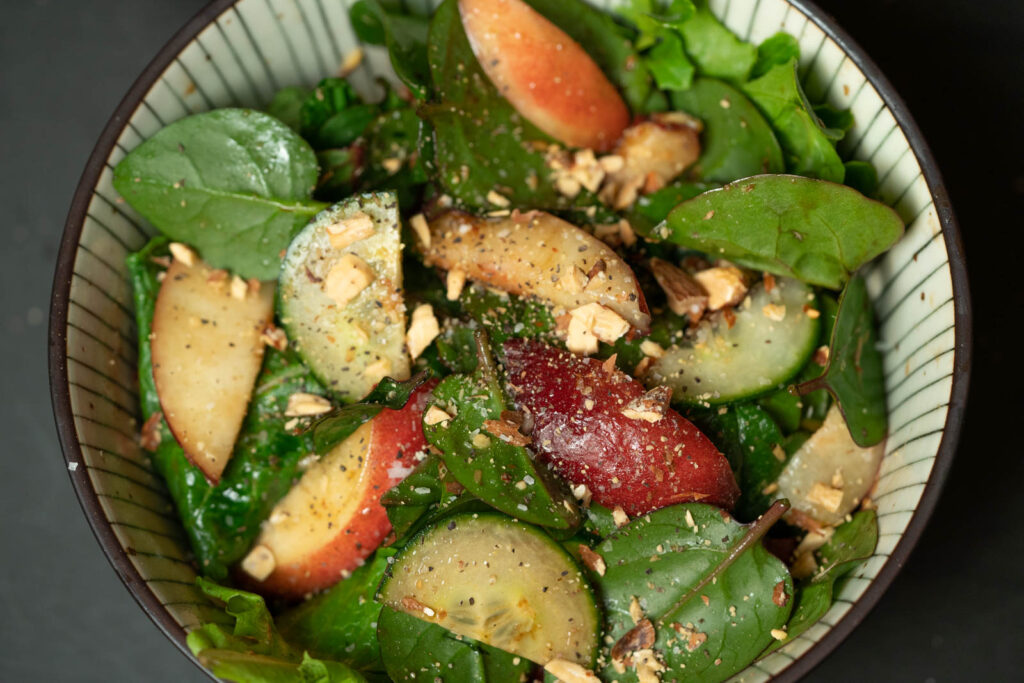 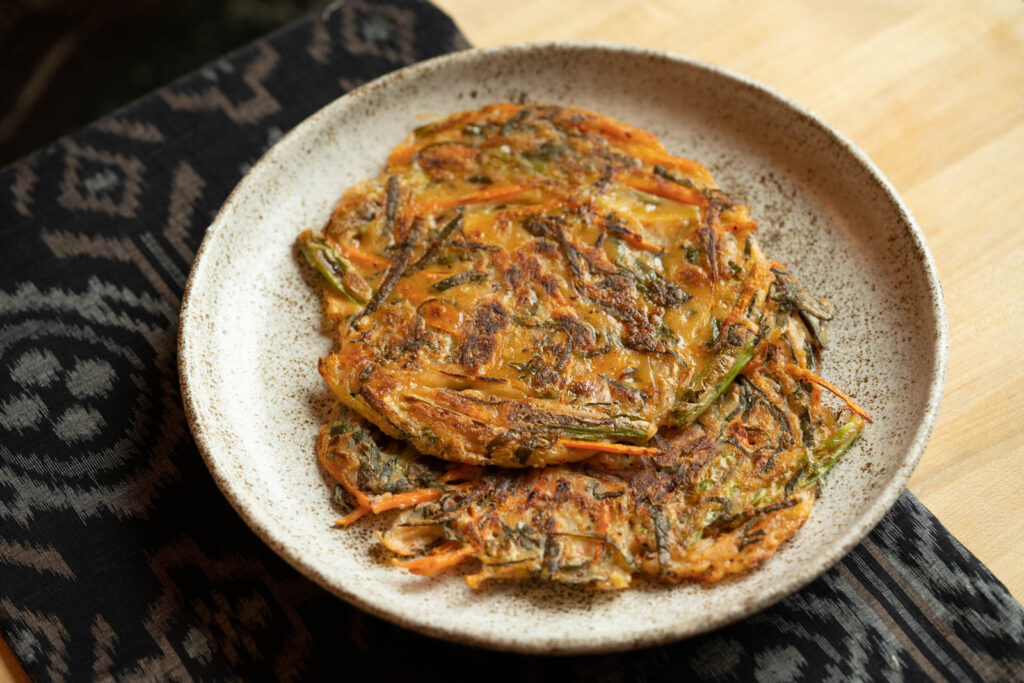 Korean Radish: Episode Six | What the F is this?!