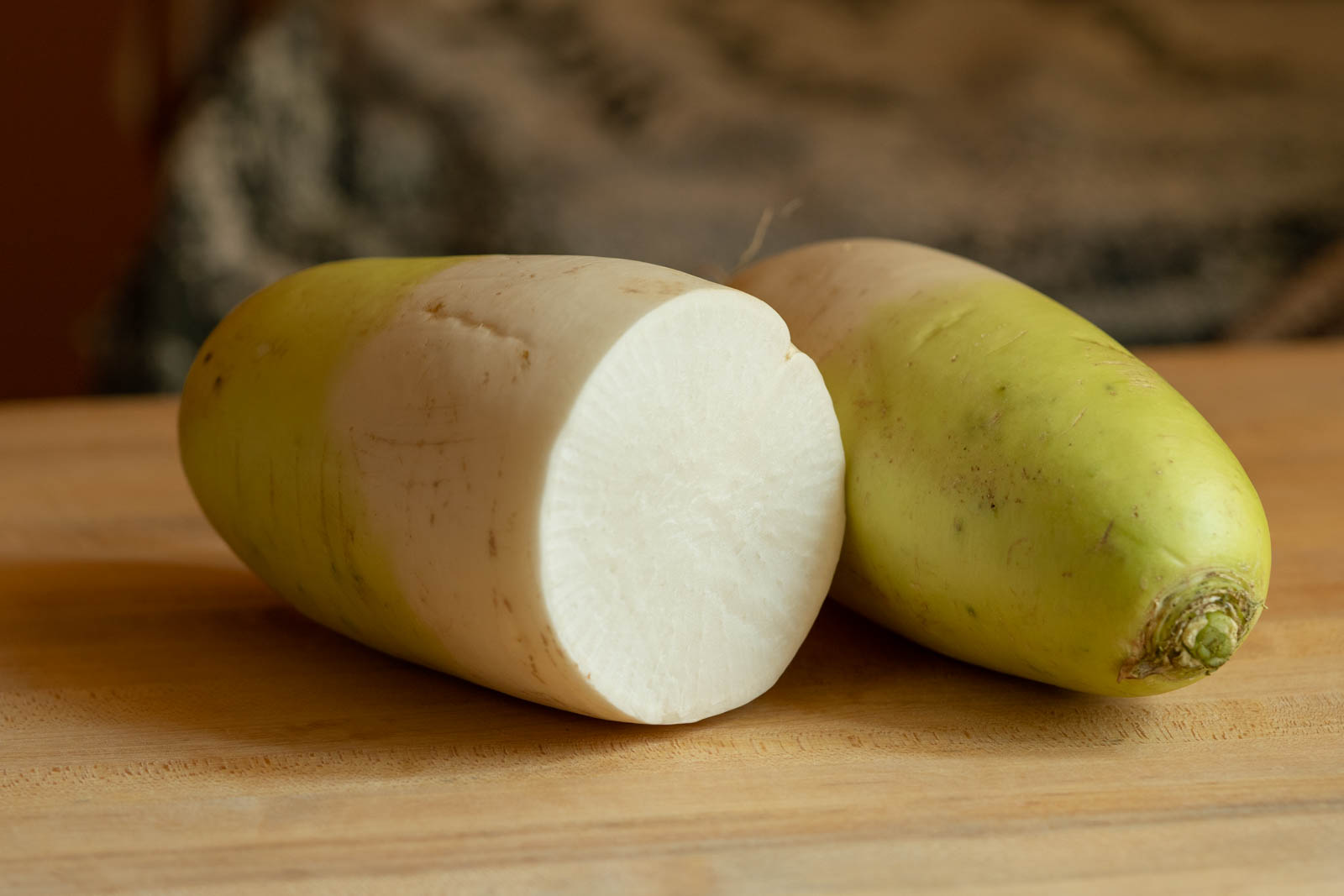 Not an unfamiliar ingredient, the Korean radish has always been one of those ingredients we see but walk right past because, well, it’s just a radish. However, launching this whole “What the F is this” series has given us confidence in trying new things or even things we have seen but just never got around to trying – so Korean radish went straight into the cart! This radish does catch the eye because of its distinct white and green color, especially next to the more bland all white daikon. Just based off looks, the Korean radish seems much juicier than your common white radish or daikon. So let’s see learn more about this Korean radish!

Where’d The Korean Radish Come From?

Korean radishes are pretty much a staple in Korean cuisine. You can find it in soups, stews, salads, kimchi, and even their side dishes (banchan). It’s very similar to the daikon radish but shorter and fatter and usually green top and white bottom colored. Radishes were first cultivated in China then spread out to other Asian countries and eventually everywhere else. In America, you can find Korean radish in your Korean, Chinese or even Japanese super markets.

Mu is the Korean name for radish and it contains lots of ascorbic acid, folic acid and potassium. Basically, it packs a ton of Vitamin C and it’s low in calories which makes it a strong contender for those trying to shed some weight. Maybe this is how Koreans stay so slender despite all the beer and noodles they eat?! (Haha!)

How Do I Pick & Store Korean Radish?

When picking Korean Radish at the store, make sure to look for firm green stems. If your radish doesn’t come with stems, as ours did not, then look for firmness in the radish itself. Any softness or spongey textures are a sign old age. For color, choose one that is a bit bright, rather than dull.

Storing Korean radish is best unwashed and wrapped in newspaper in a cool place. If your home is warm, keep it in the fridge. Keep in mind that if it’s too cold, it will get spongey in texture. You can freeze the ingredient by washing, peeling, cutting, and sealing it tightly in a bag – but keep in mind that frozen radish is best used in soups as it becomes very soft after defrosting.

Handling Korean radish is the same as handling a carrot. Washing, peeling and cutting it to desired size and doing with it what you want! Raw Korean radish is a bit peppery with a slight sweet tone when it is raw but when its cooked that peppery spiciness disappears. If you have ever gone out to eat Korean food and your order came with a number of banchan you probably have had this ingredient: it’s in radish kimchi, cabbage kimchi, musaengchae which is a common banchan at least where we are and also can be found in soups and stews. We really like the idea of radish in soup because the texture of the cooked radish gives soups a nice bite.

Korean cuisine is amazing in that it always seems super complicated to make but it couldn’t possibly be, because usually it’s one Korean mom making everything by herself. Most dishes, even their side dishes, seem like so much trouble to make, which is why most opt to just buy Korean food from a restaurant; unless you’re lucky enough to have a Korean mom that keeps your fridge stocked. We struggled a bit on how we wanted to showcase Korean radish and went back and forth but felt it would be too obvious to make a Korean dish. The beauty of radish is that it is a blank canvas. The point of our “What the F is this” series is to first educate then inspire people to think outside of the box when it comes to ingredients. Just because something has the word Korean in it doesn’t mean it should only be use to make Korean food. With that said, it is a perfect ingredient for vegans and vegetarians as the adds texture in our Korean Radish Mango Salad or can substitute protein like in our Braised Korean Radish Tacos. 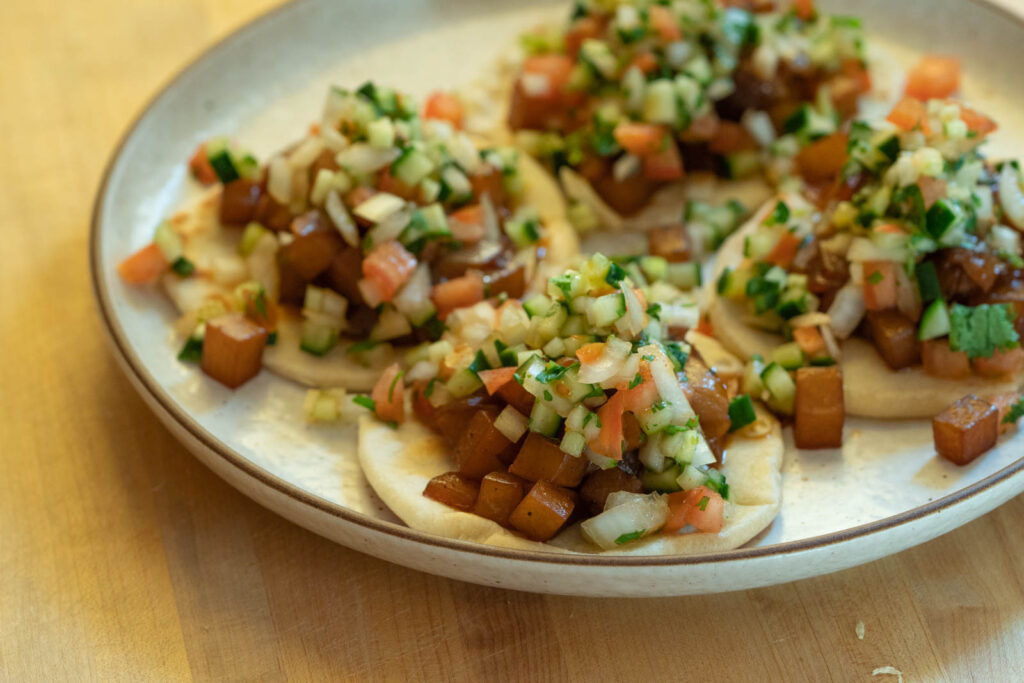 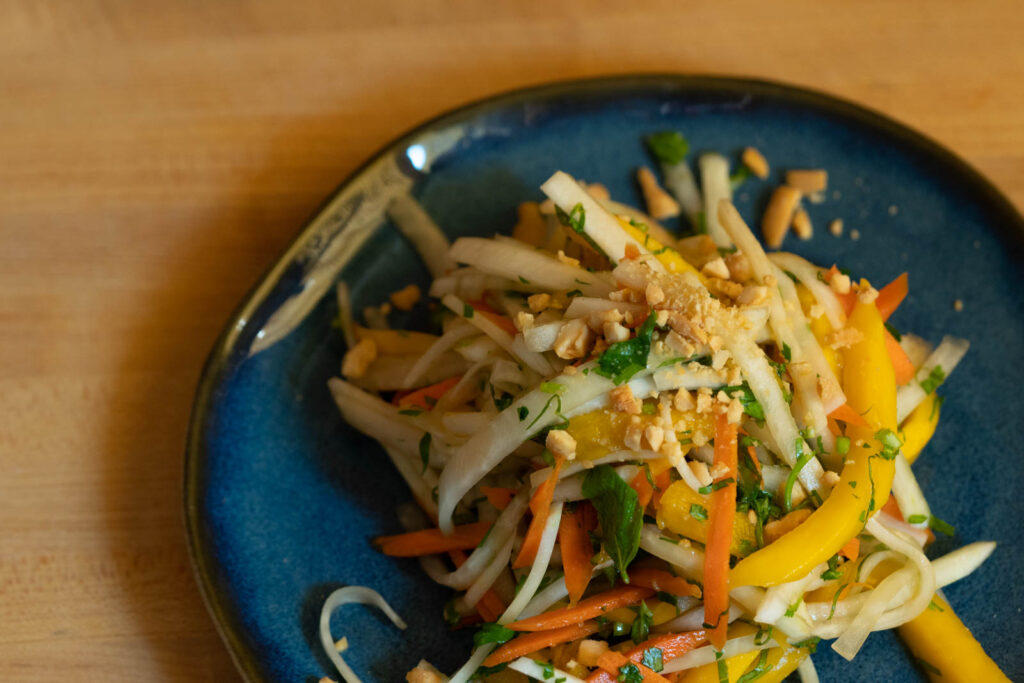