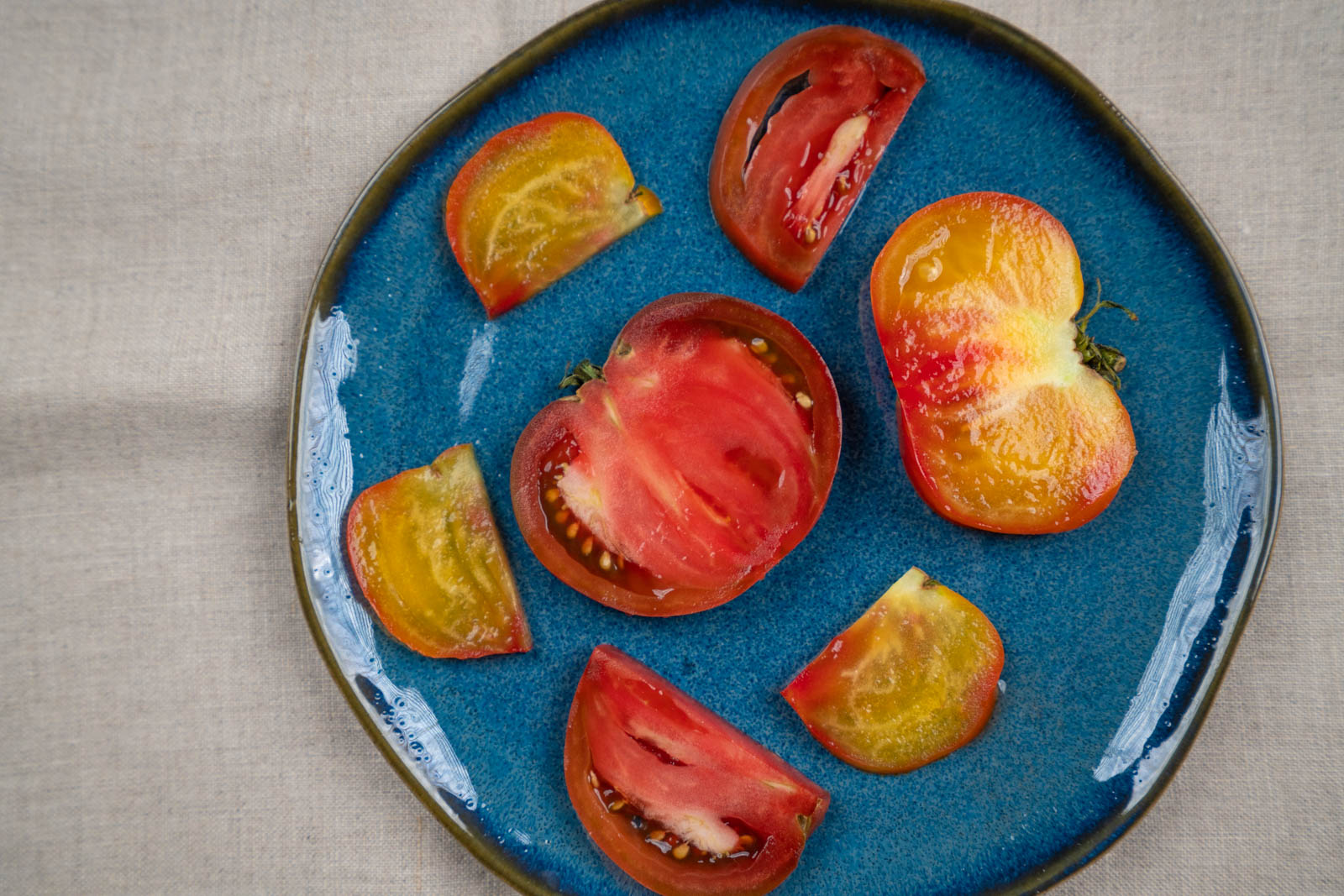 Tomatoes – you’ve probably met these guys before, and most likely you’ve encountered the Hybrids. They’re the ones available year round in the grocery store – super red, thick skinned, very firm – you know the kind? They’re not bad, they’re just bred to resist diseases, store and travel well… which isn’t necessarily the qualities we look for when we think about eating something, right?

Another issue is that most grocery produce is picked while hard and unripe, which means they never develop flavor, especially tomatoes, which can’t ripen off the vine. If you can remember that tomato slice in your last burger or sandwich that got all soggy and tasted like.. nothing – well, you know you need to change your game. So on today’s episode of “What the F Is This?!” we’re going to talk to you about the heirloom tomatoes.

So what the heck are heirloom tomatoes?

These are the fantastic, vibrant, highly varied in shape in size: sometimes perfect globes or sometimes cracked bulbous beefsteaks or sometimes rainbow cherries. They’re bred without the commercially desirable genetic mutation that allows the fruits to uniformly ripen, which also happens to prevent the sugars in the fruit to develop fully – this is also why heirlooms taste so much better than hybrids. Heirloom tomatoes are dubbed because the seeds of the tomato have been passed down from season to season and they are open pollinated, as in, naturally by birds, insects, wind or human hands. They’re like the purebreds of the tomato world. When you plant a seed from an heirloom tomato, you’ll get a plant similar to the parent, unlike hybrids which often have sterile seeds.

The term “heirloom” didn’t come into play until 1981 when a Kent Whealy of Seed Savers Exchange used it in a speech – with permission from the a guy named John Withee who used it in relation to beans, who had also taken it from another bean guy Prof. William Hepler back in the 1940s. Fun bit of history there.

And within this umbrella of heirloom, there four categories:

There are more than 3,000 varieties of heirloom tomatoes in active cultivation worldwide and more than 15,000 known varieties. As you can imagine, we can’t cover that much in this post, so let’s just go over the general differences.

While often referred to as “black” tomatoes, most of these heirloom tomato varieties are more of a maroon or purple-brown color. These black tomatoes are said to be like wine, tend to have less acid than the reds and possess an earthy, almost smoky sweetness.

Because of their visual similarities, red heirlooms are often mistaken as hybrid tomatoes at markets. However, red heirlooms are more varied in their flavor profiles than hybrids, and tend toward more robust, higher acid flavors.

Orange tomatoes (not yellow), are mild, sweet, and are low-acid. They are the varieties that will most remind you that tomatoes are, botanically speaking, fruits.

The commonality of green tomatoes is a bright acidity, but the degree of sweetness tends to vary quite a bit.

Striped heirlooms (sometimes called marbled), are beautiful and they tend to have a rich, juicy, super-sweet flavor that is low in acid.

Beefsteak tomatoes are the big buddies, they have smaller seed cavities making for more flesh and hence, more beefy bite. Plum tomatoes, or Roma or paste tomatoes also have lower water content and a more chewy flesh, which makes them great for sauce making – for example, the famous San Marzano. Baby tomatoes, or cherry or grape or cocktails vary widely too. Cherry tomatoes have thin skin and high water content but are super sweet. Grape tomatoes have thicker skin and less water, but store better than cherries. The cocktail tomatoes are slightly larger than the grapes and cherries and they’re grown hydroponically so they’re the best tomatoes to buy “out of season”.

How to Pick and Use Heirloom Tomatoes

Heirloom tomatoes are so tasty you can simply eat them on their own or with a little salt and olive oil. So with all these varieties, how do you choose? I mean.. you can’t go wrong really, but you might be choosing them for particular colors or flavorful profiles like yellow heirlooms tend to be milder than the tart, sharp reds and the greens have a light, zesty bite. The darker varieties have more savoury qualities than that of the sweet. But possibly the most important would be the texture, which will be dictated more by the shape.

Beefsteak tomatoes are the big buddies, they have smaller seed cavities making for more flesh and hence, more beefy bite. Plum tomatoes, or Roma or paste tomatoes also have lower water content and a more chewy flesh, which makes them great for sauce making – for example, the famous San Marzano. Baby tomatoes, or cherry or grape or cocktails vary widely too. Cherry tomatoes have thin skin and high water content but are super sweet. Grape tomatoes have thicker skin and less water, but store better than cherries. The cocktail tomatoes are slightly larger than the grapes and cherries and they’re grown hydroponically so they’re the best tomatoes to buy “out of season”.

In terms of storing these more delicate beauties, they have a short shelf life so try to consume quickly. Allow unripe tomatoes to ripen at room temp and store ripe tomatoes in the fridge, but allow them to come to room temp before eating for best flavor.

If we’ve managed to pique your interest in heirloom tomatoes, please give our vid a thumbslike or leave us a comment below and let us know which variety you want to try! Subscribe to our Youtube so you don’t miss our next WTF Is This?! ingredient that arguably changed the world.

All About Eggplants: Episode Eleven | What the F is this?!

Moringa: Episode Three | What the F is this?!