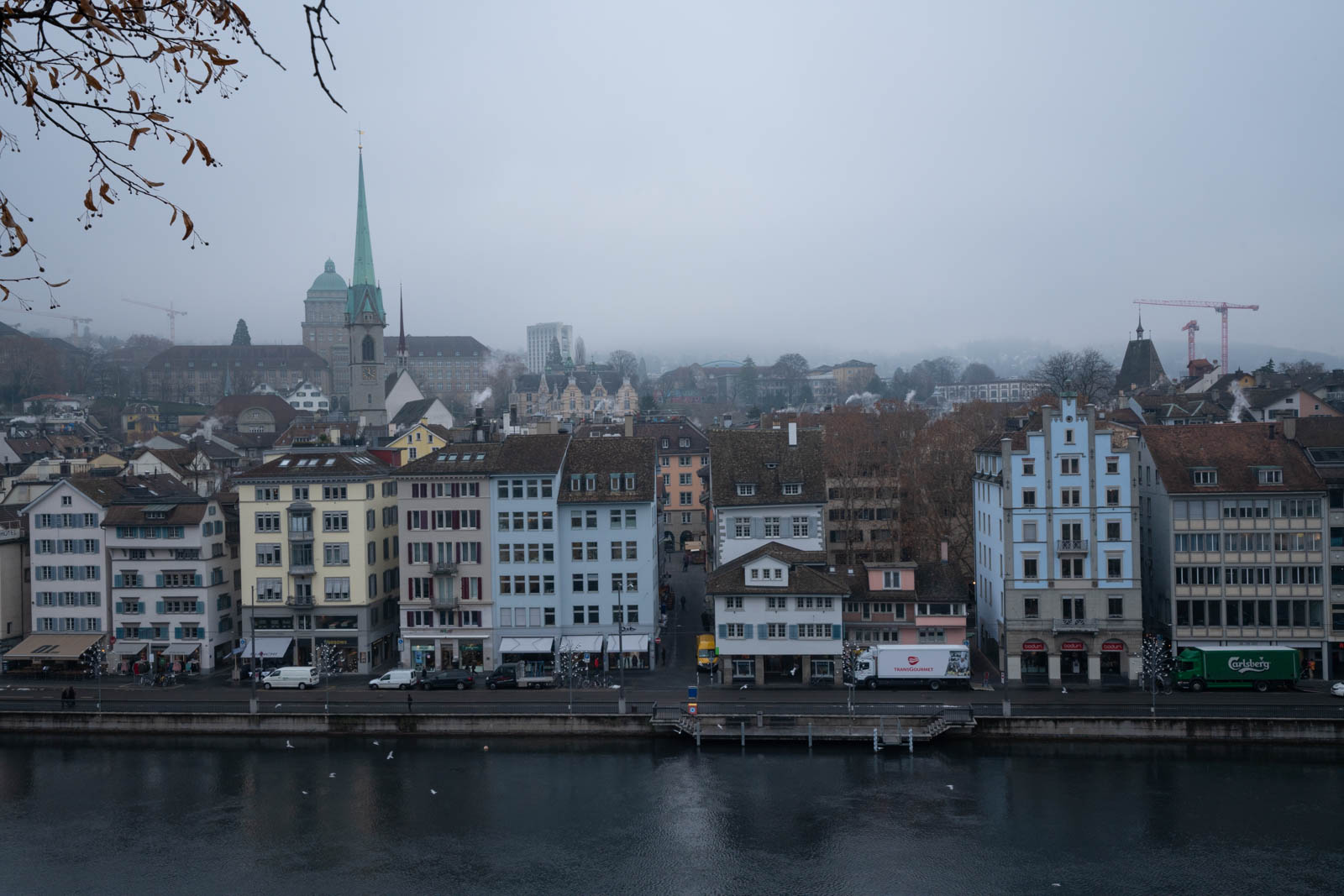 We spent the first half of our week in Switzerland in Geneva and the latter short half in Zurich; meeting a friend and visiting Christmas Markets. Zurich felt significantly colder than Geneva, especially with all the frozen snow on the ground, though we didn’t get any fresh snow. The most interesting transition was coming from Geneva to Zurich via train and hearing and seeing the switch from French to German as the main language. The lovely thing about arriving via train to Zurich in December is that the Main Station has its very own Christmas Market – so the moment we arrived we felt the festive cheer.

As tempting as the Christmas Market is, we first have to check into our AirBnB, a private room in an apartment in District 1. Our host Nilma is very nice and our stay takes me back to my college days sharing an apartment. After settling in, our first task is to buy groceries for a couple meals so we can save a little eating in during our stay. Since we’re a little tired from the travel day, we opt to eat out for dinner and check out our friend’s recommendation Lily’s.

The most expensive Pad Thai… in the world?

We locate the hipster style street food restaurant with long picnic tables and cozy up between some other young looking people. We spot a few of those signature iced teas, so we join the club and order a Butterfly and a Chilling Blue; tall glasses of a deep purple garnished with mint and a cool blue with tiny purple flowers floating in it. For a good 5 minutes we amuse ourselves trying to photography the colorful tea. We try to discreetly use the obnoxious phone flashlight to light up the glasses and wind up just giggling to ourselves. We don’t have long to wait before our order of Pad Thai or Chiang Mai noodles comes in, at around 20 CHF a plate, which is the average price of a plate in Switzerland but shocking when compared to the $10 average at home. Luckily it turns out to be good quality stuff, some of the best pad Thai and Chiang Mai noodles we’ve ever had (caveat: we’ve not been to Thailand yet, but headed there this coming summer).

According to the forecast we were getting a variety pack for our visit: one rainy day, one sunny day, and one cloudy day. We planned to visit Uetliberg and get a view of Zurich on our one sunny day, but that morning we stepped outside and it’s completely foggy. As we walk through the city, the buildings are almost invisible, so we decide to wait out the fog and maybe save the mountain visit for another day. Instead we spend the morning exploring District 1 and enjoying all the Christmas decorations among the shops.

We crossed over cobblestone through stately buildings with quaint shuttered windows, passed water fountains with beds of bright pansies, and we found a narrow street away from the throngs of holiday shoppers to the quiet and almost empty City park Lindenhof. There was however a horde of pigeons guarding the water fountain as we approached the ledge to look out across the river. Despite the still foggy day, we could see the church spires and cranes peeking up between the buildings across the way. As a flock of birds swooped over the water, the park suddenly came to life with a large group of runners cutting through, pairs of neon running shorts standing out harshly in the winter air. Following the runners was an equally energetic group of kids clad in much more muted school uniforms, chasing each other among the trees.

Don’t Eat Your Heart Out at Christmas Markets

It was hitting lunch time, so we headed towards the Zurich Main Train station to spend our lunch money sampling some Christmas Market foods. We were pretty excited for more Christmas Markets after our first experience in Geneva and Zurich has quite a few. The Zurich Main Train station was pretty big and had everything from raclettes to baumspritzel. The raclettes are a good way to sample typical fondue ingredients without commiting to a whole fondue pot, more like a fondue experience for those on the go. Our favorites however were on the sweeter side; the poffertjes, Dutch style pancake puffs and schokokuss, chocolate coated marshmallow cakes that you can get in all sort of flavors.

Something we noticed during our travels in Europe is the prevalence of Nutella. Back at home, it’s a special treat, but in Europe we’ve found nutella flavored everything and of course you’ll find it as a topping for almost every Christmas Market treat. Be careful at these Swiss markets because you can easily get carried away sampling and eat away all your money! Each item we tried was around 10 CHF, so you can imagine how quickly it all adds up!

Get Cozy with a Beer at IBB

After trying to balance out our pricey lunch with a home cooked dinner, we decide to treat ourselves (it’s an endless cycle of give and take) with some craft beer at International Beer Bar. Back in the Bay Area we have a pretty big craft beer culture, so I’m always up to checking them out wherever we go. We elect to pre-burn some calories by walking over to the International Beer Bar in the crisp clear night air. The corner it’s on is dark, but cozy lights beckon from within. A big group is squeezed around a single circular bar table by the door, but there are plenty of intimately tucked tables towards the back of the L shaped room. The chalkboard menu boasts a myriad of names more colorful than the chalk, like “F*** Trump’s Gramma”, which was a very pleasant pumpkin/yam beer. As they offer many international beers, most of them are bottled and rather pricey and only a handful are on draft. We grabbed our beers and received a Lego pizza man as our tab ticket and hopped up onto a couple stools by the window. I sipped at my heavy but smooth Konrad Stout and we chatted quietly to ourselves, occasionally watching as someone stepped outside to smoke; their cigarette a single light in the darkness.

Meeting a friend for the first time

The next afternoon we had planned to meet a friend, Theo, whom we’ve never actually met. He and I were momentary colleagues on a project together, connecting very briefly via email before I took off. His writing had struck me as that of an excellent penpal so I reached out to him as we approached our trip, asking for his recommendations and receiving a warm invitation. We met at a nearby Italian restaurant when our original plan fell through. We arrived first and waiting for him felt like we were on one of those blind first dates with only a Whatsapp profile photo to go by, looking up each time someone entered. But quickly after that first handshake, we were chewing and talking like old friends. Theo had the most amazing stories of his own travels and despite how far we’ve come we felt like babies just beginning to open our eyes to the world. Lunch was over too soon and we had to bid Theo farewell, but his giant bear hugs and a couple more Christmas market drinks that evening gave us the very best memories of Zurich.

With just 3 evenings in Zurich we barely got a taste, but we did get our fill of Christmas markets. Zurich was truly a charming city and one of the cleanest in Europe so far. We loved that it had plenty of international offerings, but those came at a pretty high price. Browse our photos for inspiration or read on for more things to know before going to Zurich and other logistical information or jump down to the details on all the places we recommended. 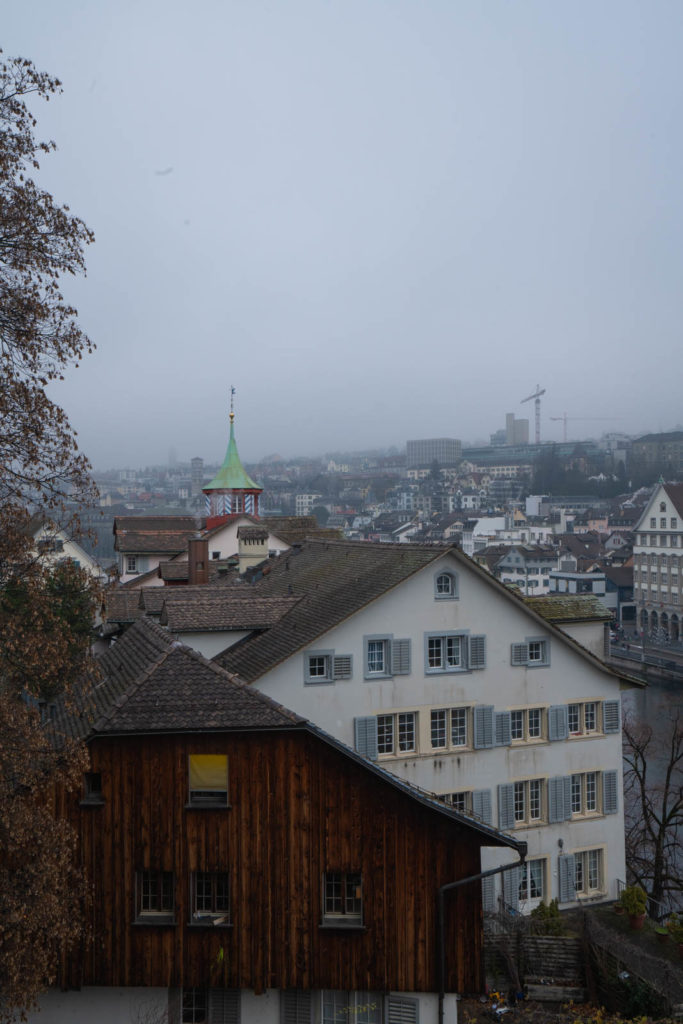 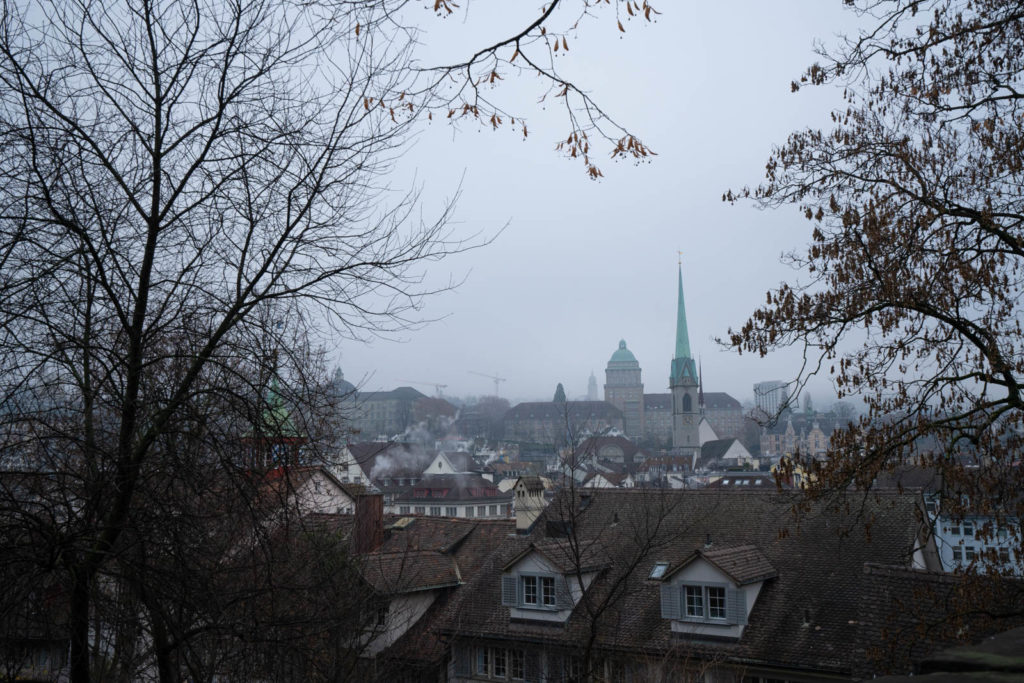 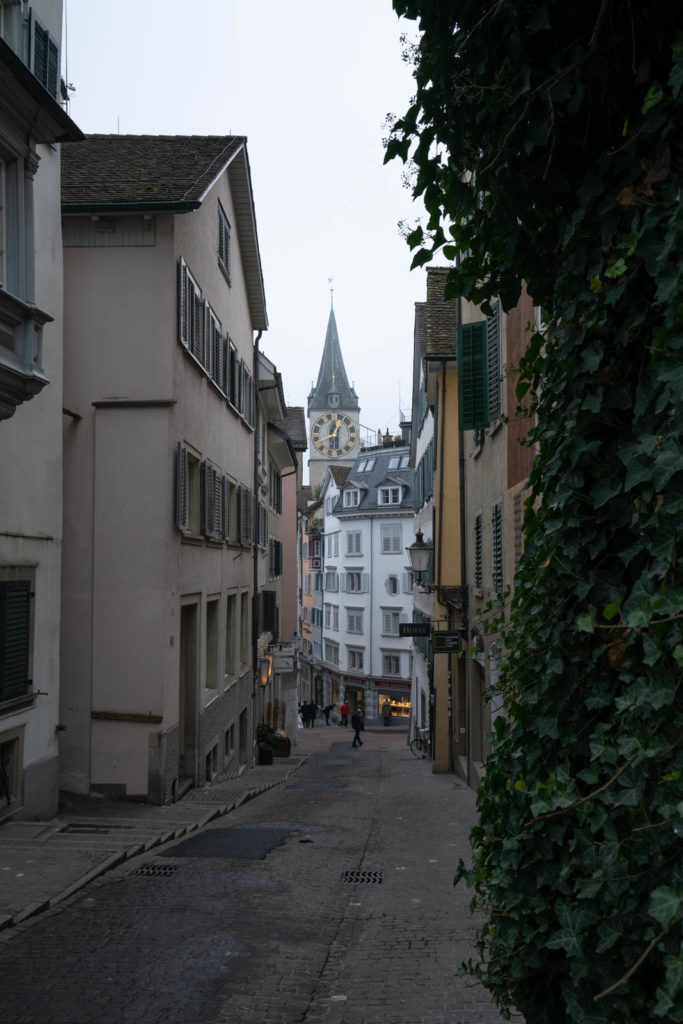 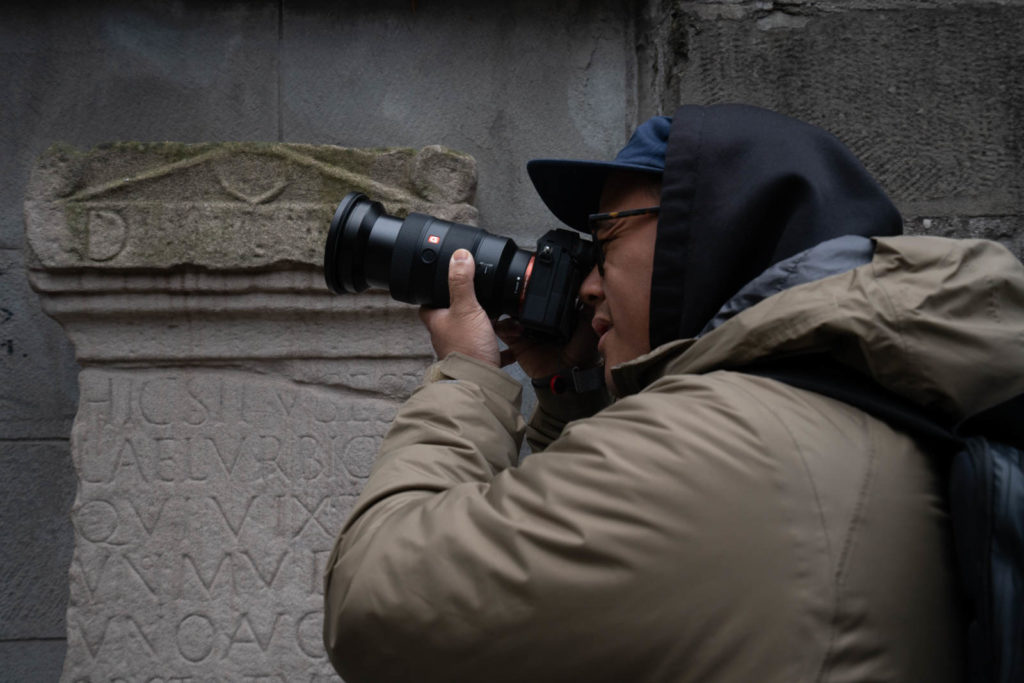 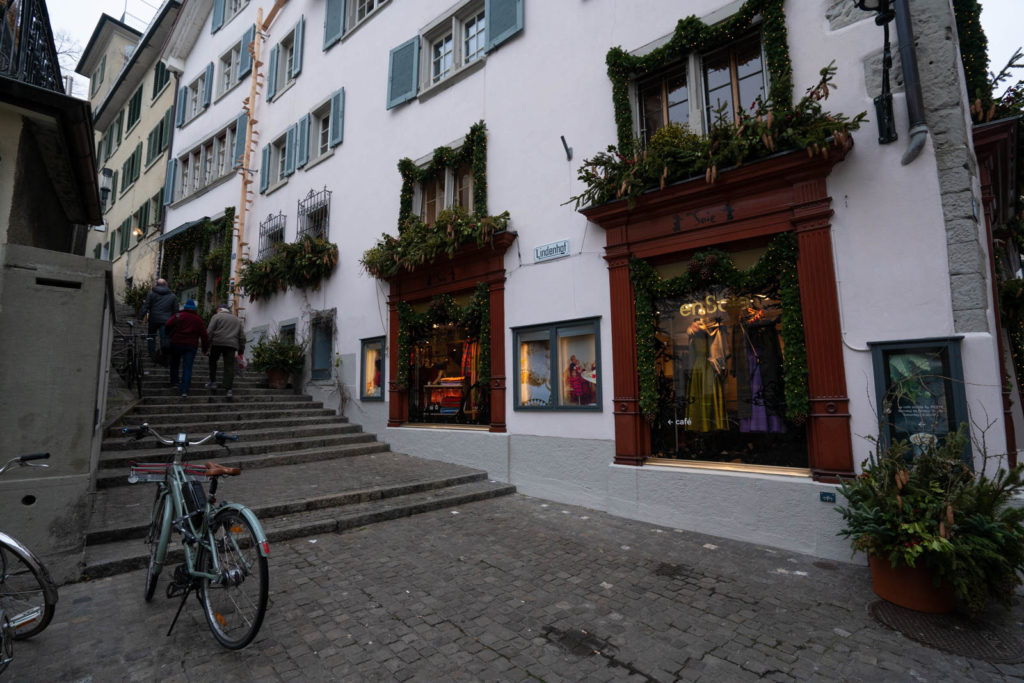 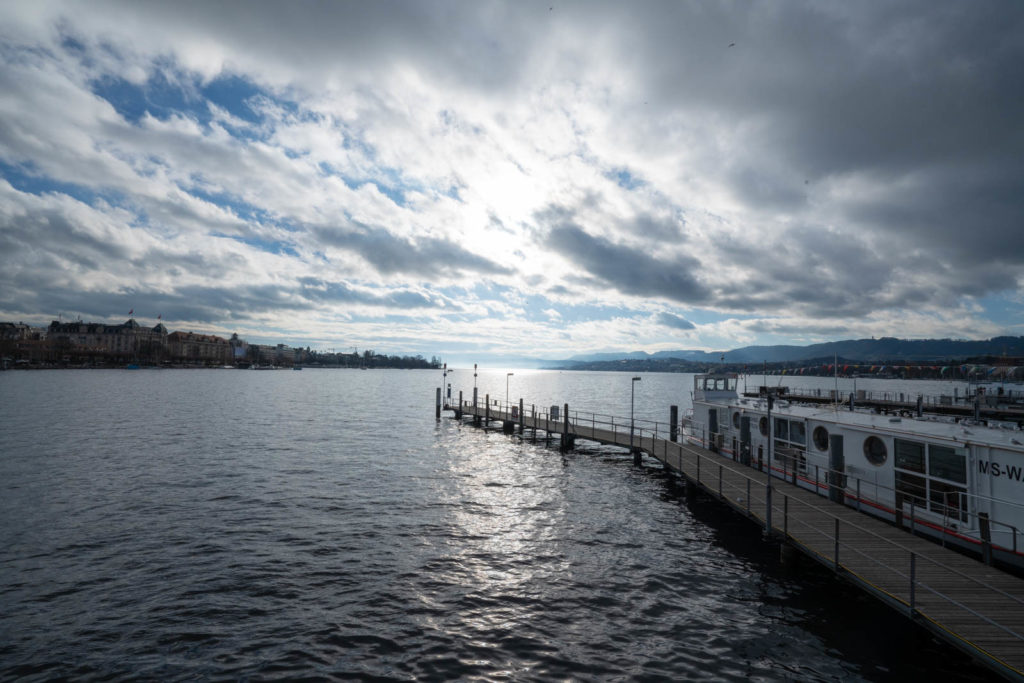 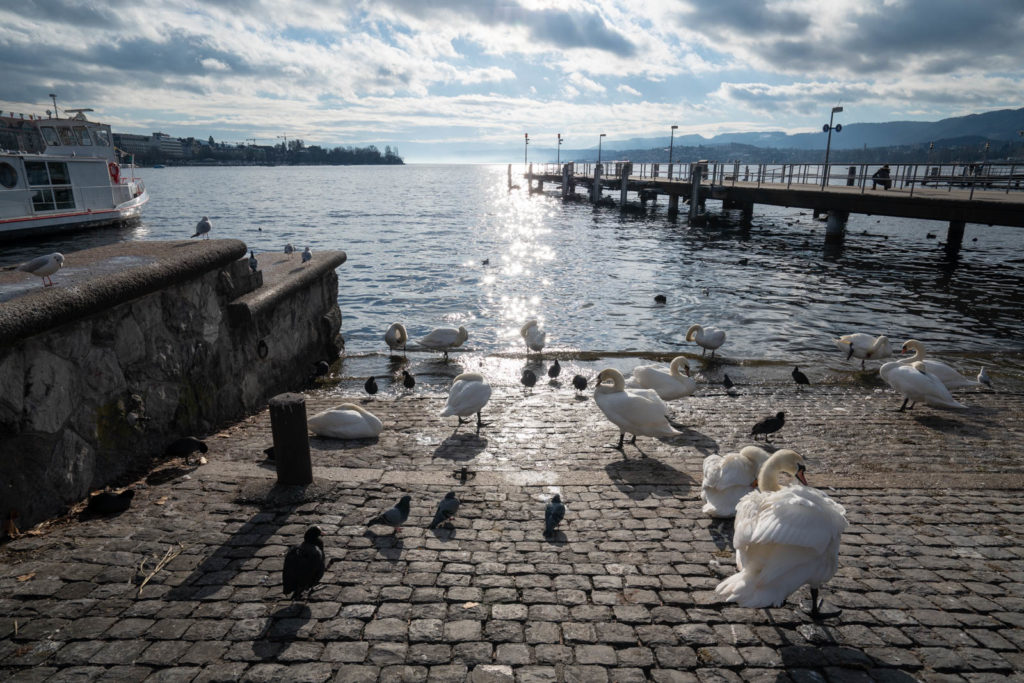 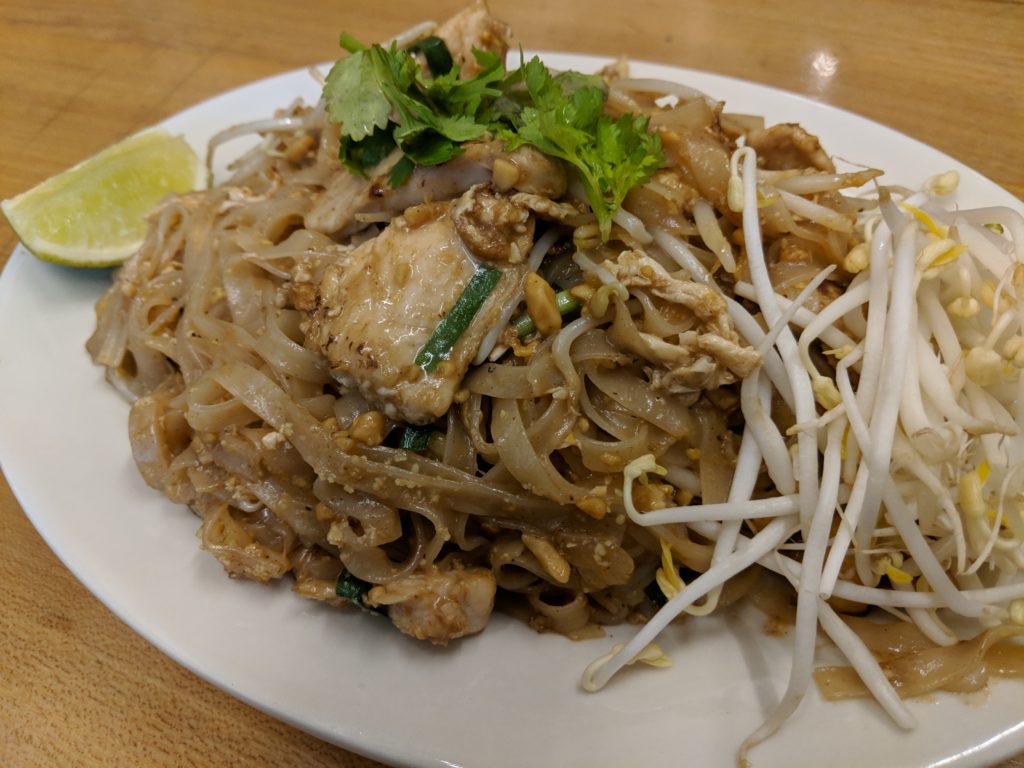 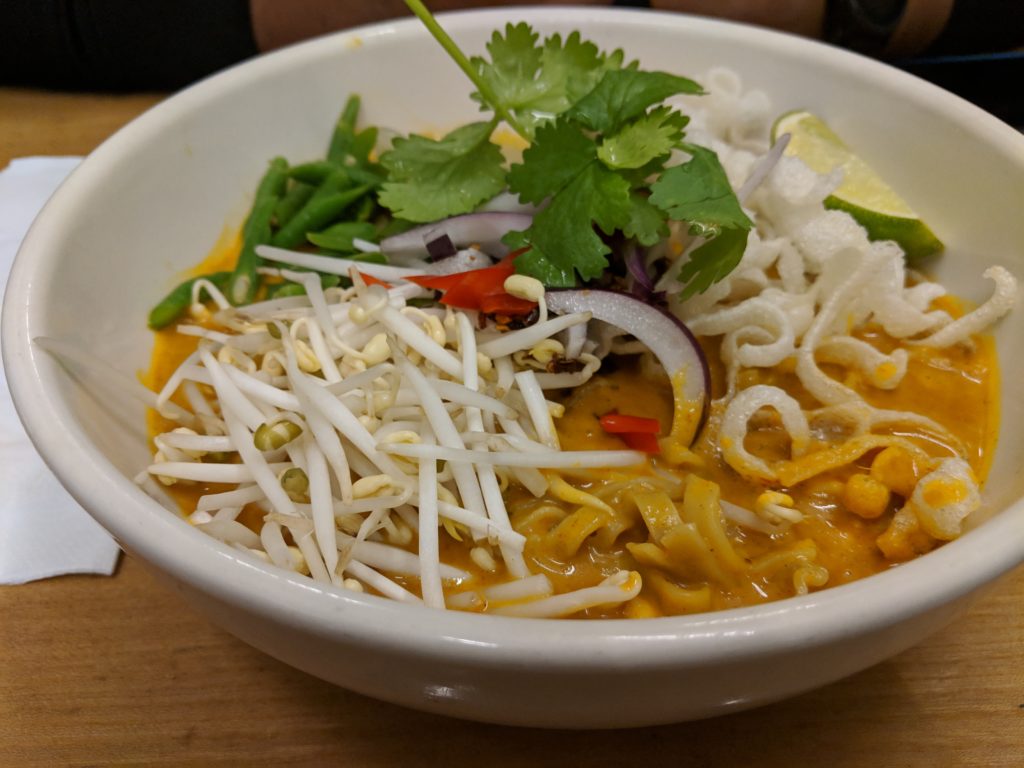 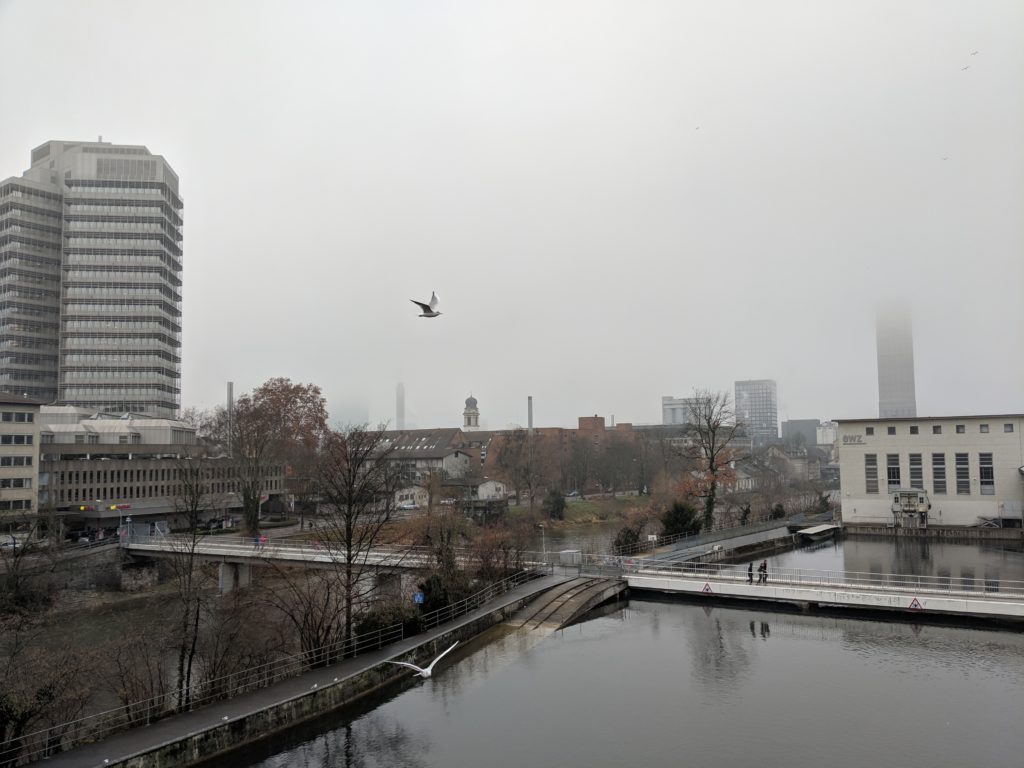 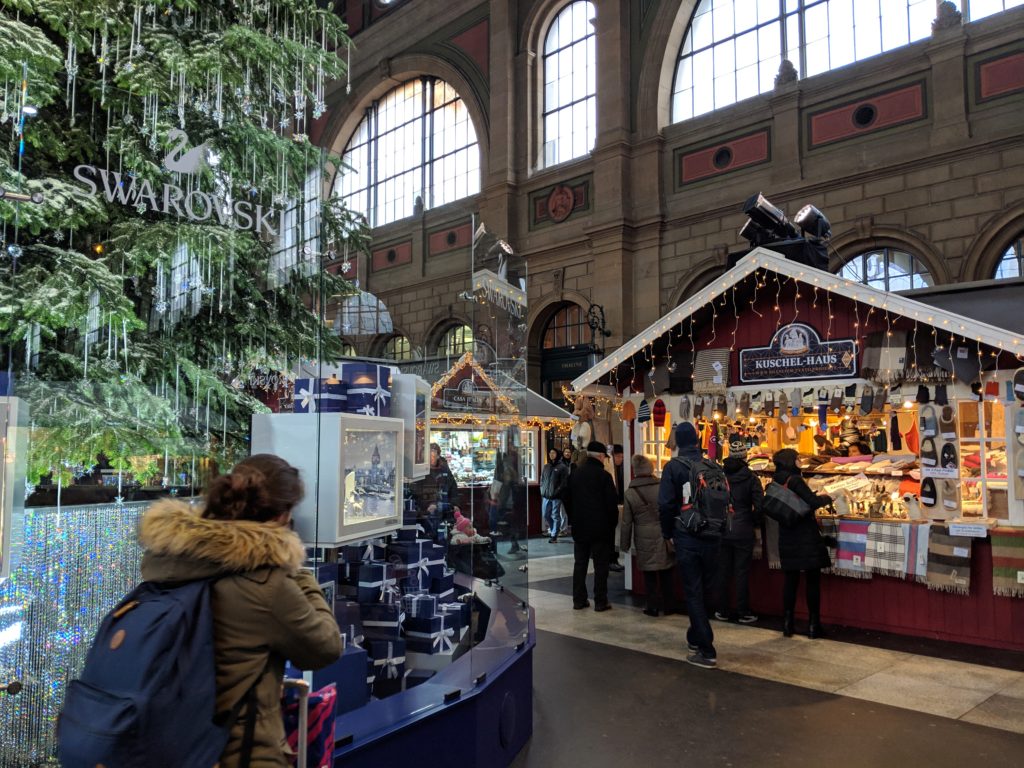 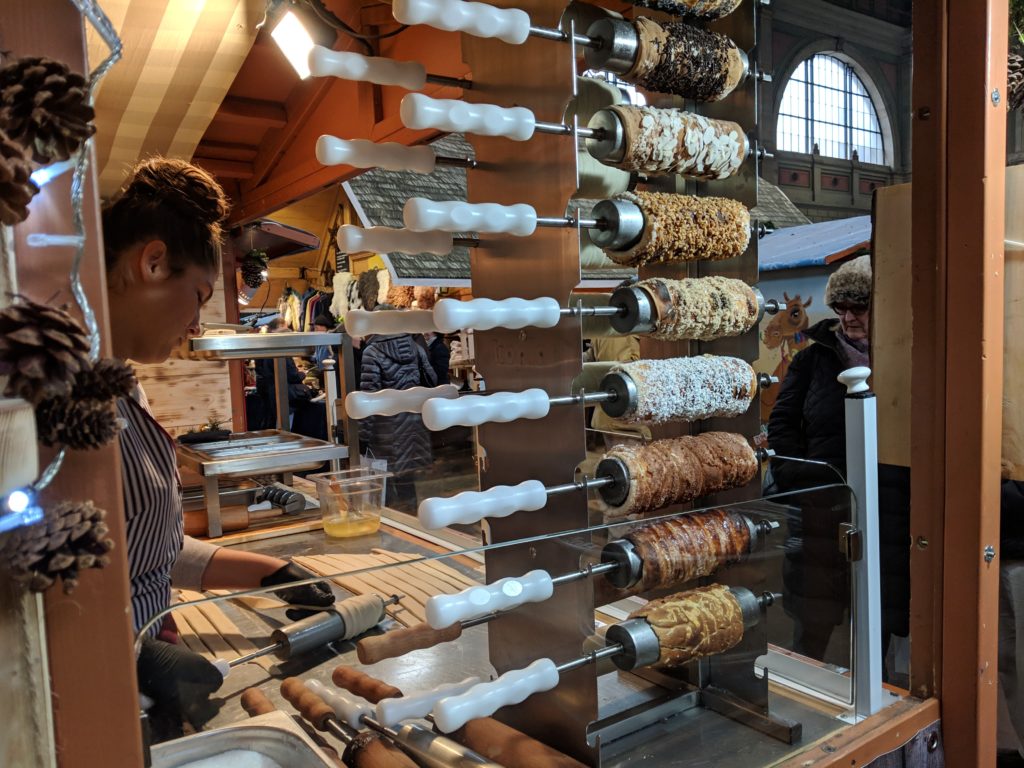 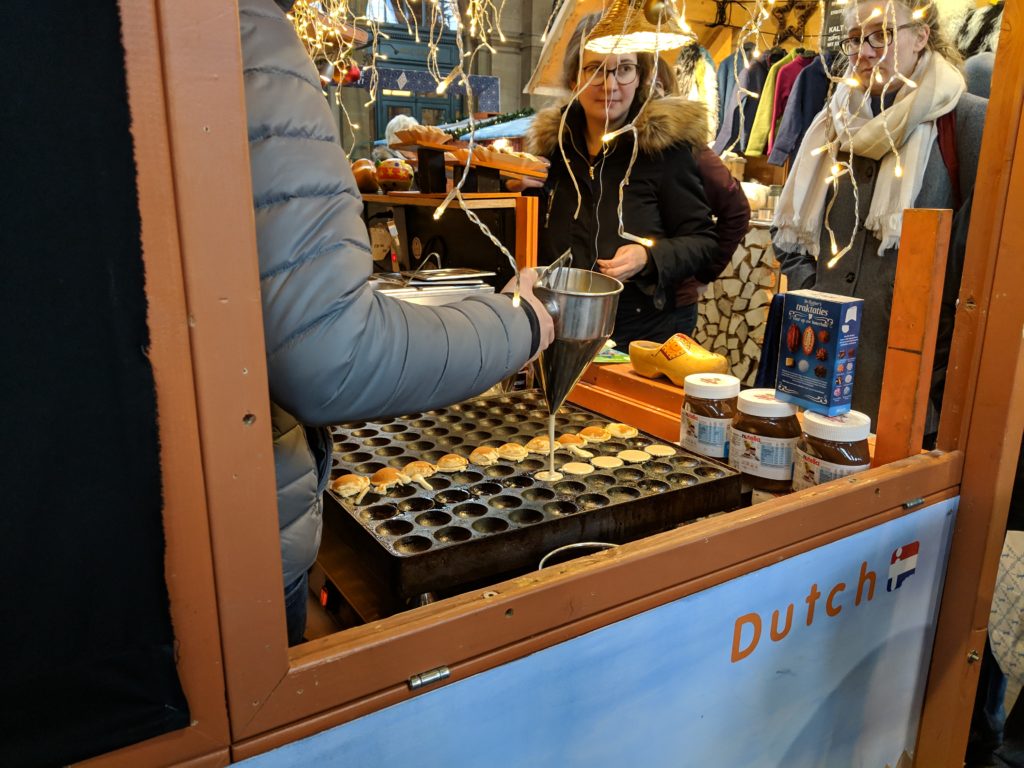 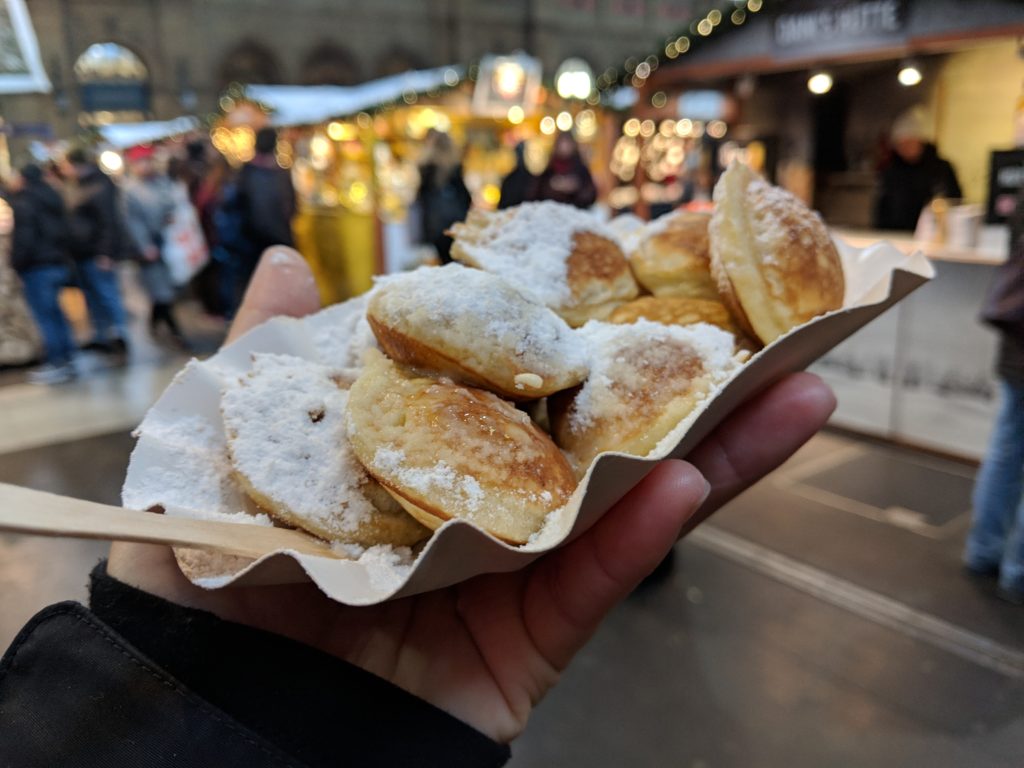 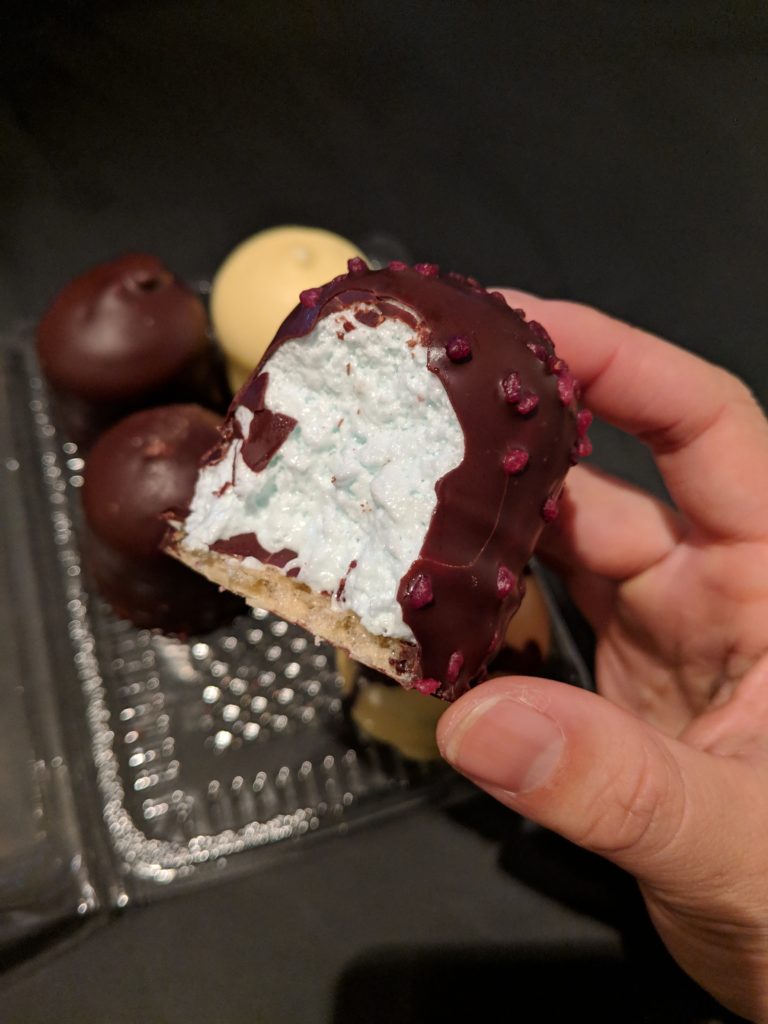 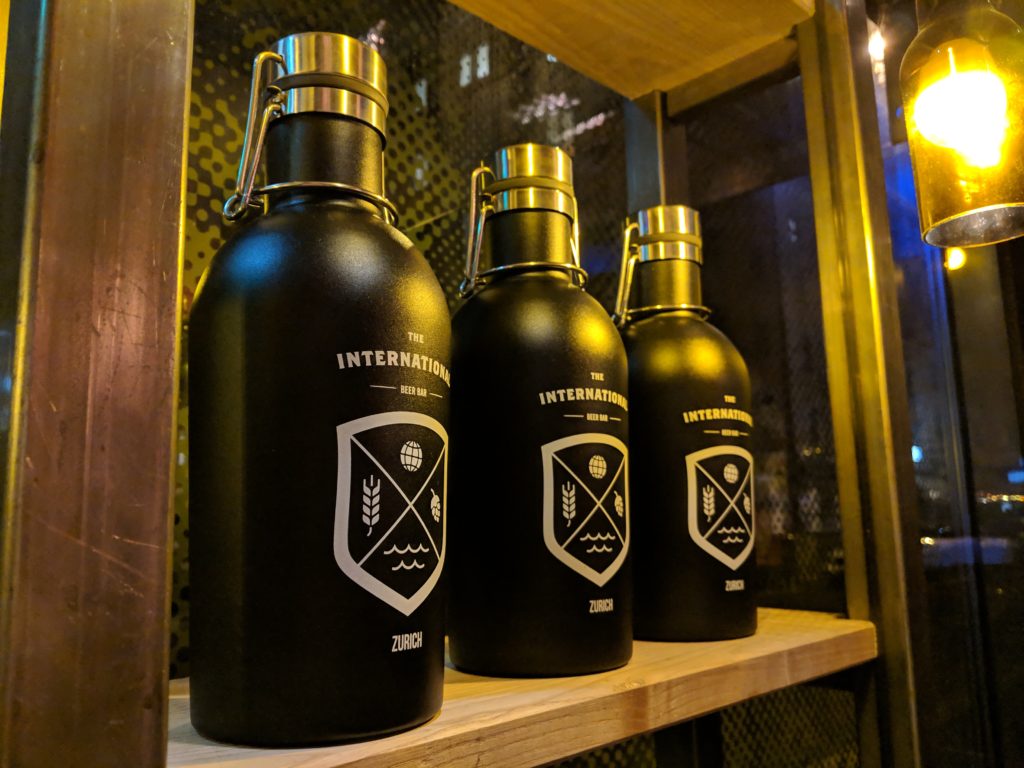 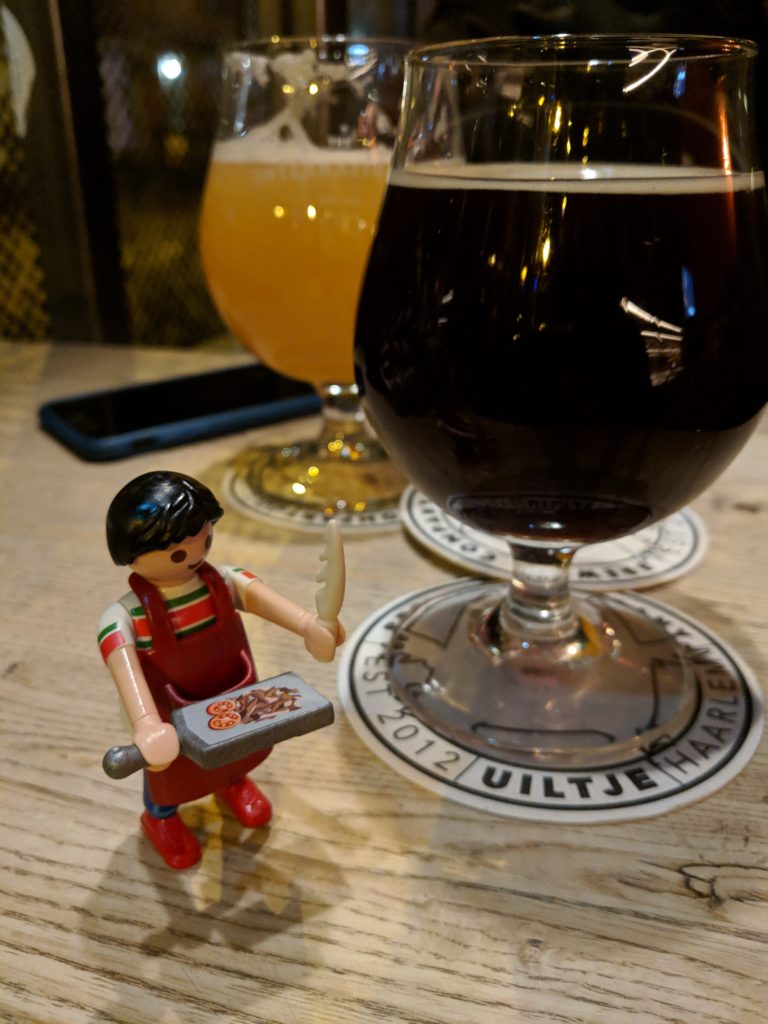 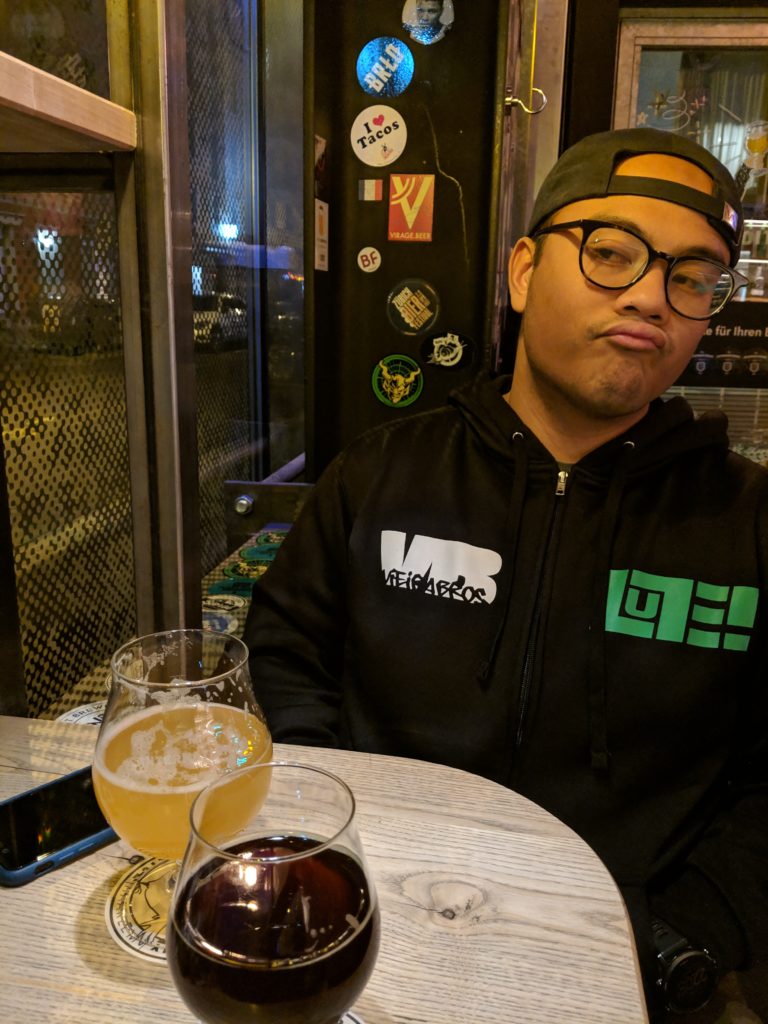 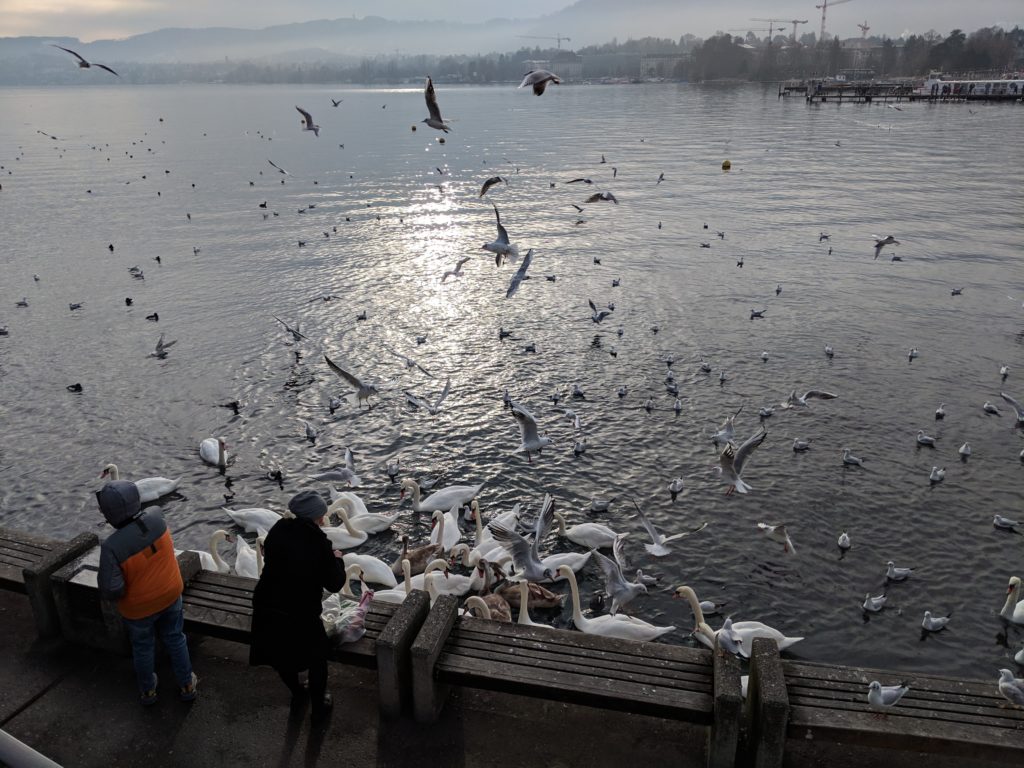 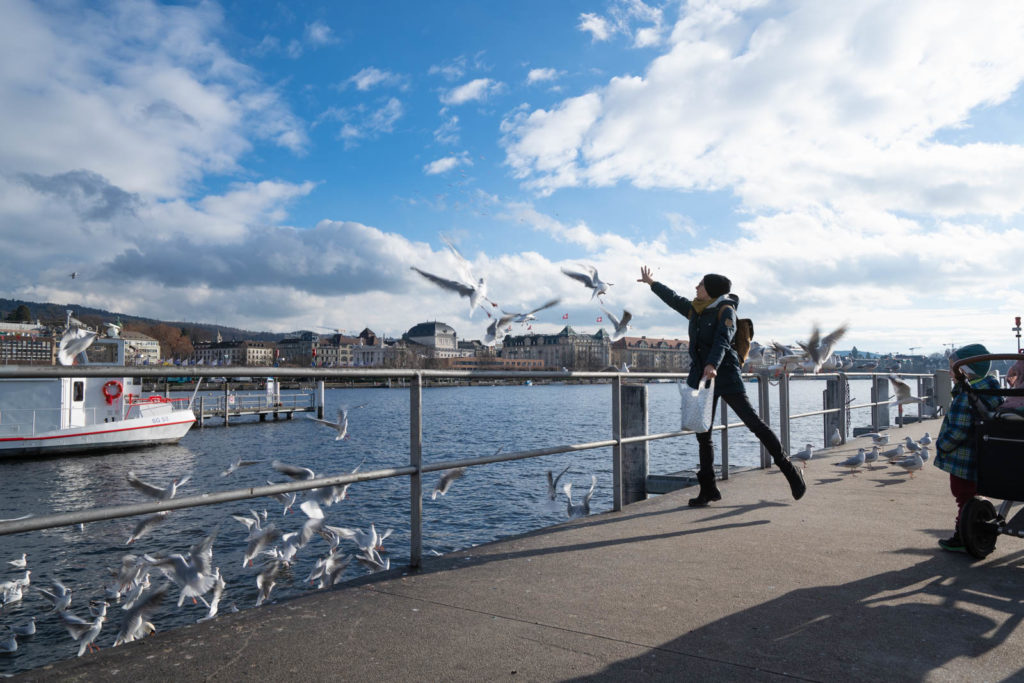 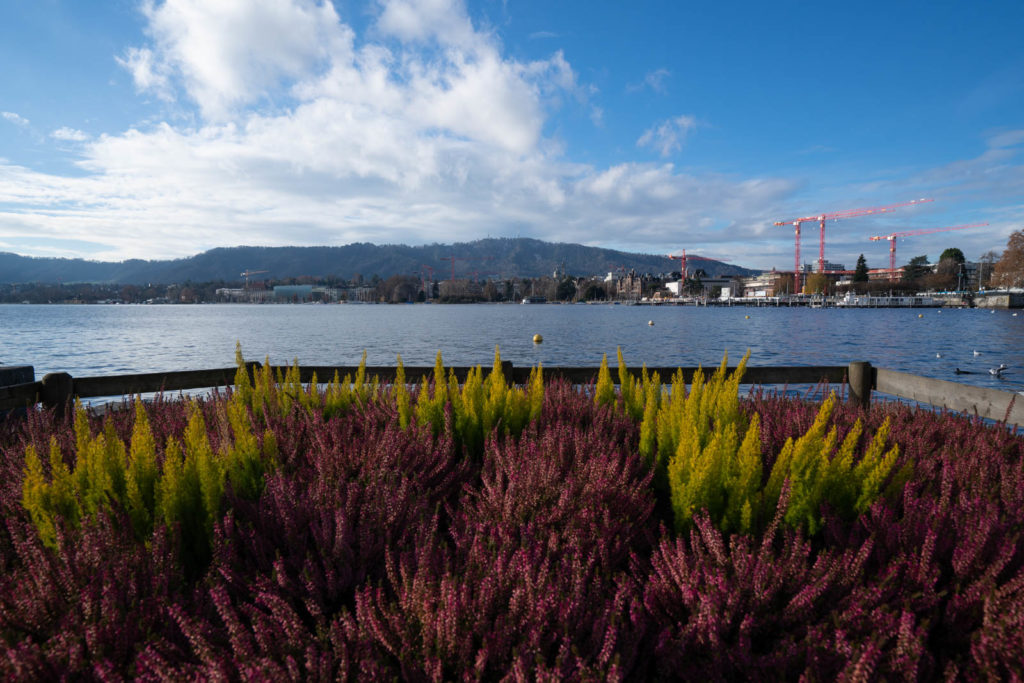 AirBnB is still relatively new in Switzerland and in Zurich we only found private rooms in our price range, so we stayed with a lovely host Nilma in her “Charming and Cosy Apt in Zürich”. Her apartment was kept very clean and tidy and she allowed us full use of her kitchen and shared the fridge space. She made us feel very welcomed and it was very pleasant sharing the space with her. She also accommodated a late check out for us as we departed on an overnight train. We highly recommend her apartment if you’re looking to travel on a budget and want a kitchen to use!

Want to give AirBnB a try?
Use our referral link to get $40 in travel credit when you sign up!

Zurich in mid-December was very cold; there was iced over snow on the ground during our visit but it did not snow while we were there. While French and German are the official languages in Switzerland, Zurich primarily uses German, though plenty of people speak English. Like most of Europe almost everything is closed Sundays.

If you’re visiting Switzerland in December, be sure to check out the local Christmas markets, Zurich has several, including a large one at the Zurich Main Station. While you can definitely get away with mostly using a credit card throughout the city, we found it useful to have cash for the Christmas markets.

Mosquito problems: None while there

Problems for tattoos: None

Traveling as a woman: Standard Precautions

Getting Around in Zurich, Switzerland

Zurich is quite large but public transportation was very easy to use. Lots of people walk in the city but the trams come fairly often so they’re very convenient. Bus stops are also very clearly marked and most (that we came across) have ticket machines. All modes were very timely. The best way to save money is getting a day/multi pass if you need more than one roundtrip, as a single tram ride costs 2.70 CHF and a 24-hour pass costs 8.80 CHF, so plan ahead if you can!

Currency: 1 CHF = 1 USD
Tipping in Switzerland is not necessary, but appreciated. Tax is already included in their pricing, so the price you see is what you pay. Switzerland has some of the highest prices for anything, however we did find that the quality of the food to be good.

$70-90/person: This was for 3 evenings in Zurich in a private room listed on AirBnB. We cooked our own meals and went to a few restaurants and sampled a good amount of Christmas market foods. We used the tram a couple times but primarily walked.

International Beer Bar, theinternational.ch, Luisenstrasse 7, $$-$$$ – Cozy intimate beer bar with international offerings, mostly bottled. We wished we could have bought a growler as a souvenir!

Teddy’s Souvenir Shop AG, teddyssouvenirshop.ch, Limmatquai 34, $-$$ – The only souvenirs we’re getting on our Around the World trip are patches for every country we visit, and so far it hasn’t been the easiest souvenir to find. Teddy’s was the supreme store for patches, not just for Switzerland but they also have a huge collection for other countries – we were tempted but we only bought the ones for Switzerland here.

Christmas in Berlin & a day in Dresden

More from Our Biggest Adventure