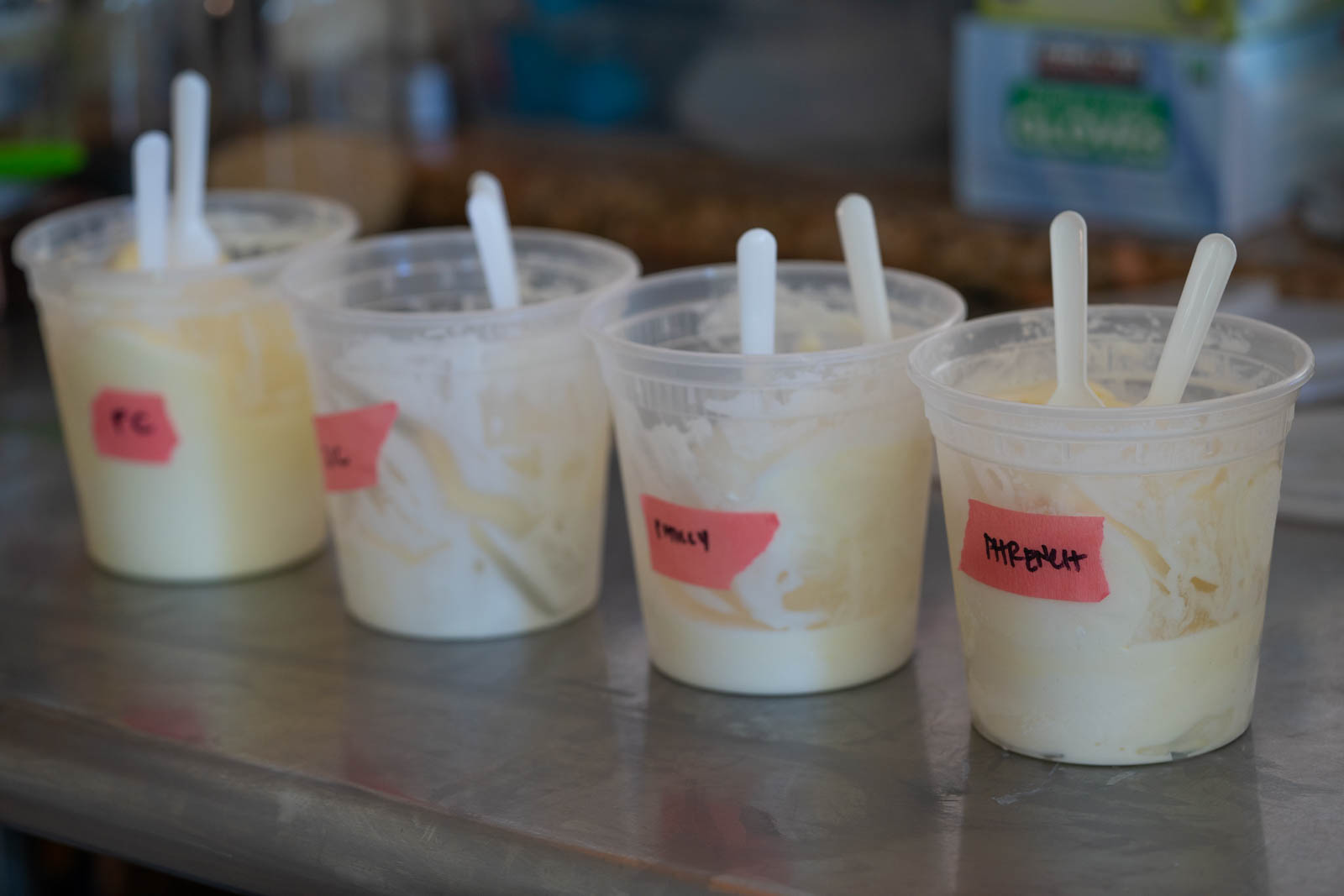 Searching For The Best Ice Cream Base

Ice cream is one of our most favorite things in the world! Our first date as an official couple was going out to get ice cream together so the sweet treat isn’t just delicious to us but holds a lot of meaning. Ever since then we have made it our journey, adventure if you will, to try every Ben & Jerry’s Ice cream out there and so far we have tried about 60 flavors. That’s a lot of pints and a lot of inches on the waist but we didn’t get into this trying to lose weight and we were aware of the physical sacrifices we needed to make in order to partake on this never-ending adventure!

With our love of ice cream, we wanted find ways to make our own at home. Originally we bought one of those KitchenAid ice cream bowl attachment, but if you’re thinking of going this route… don’t! We would definitely recommend saving more money to get a proper ice cream maker with a compressor if you think you’ll be making your own ice cream at least 2-4 times a month. The KitchenAid attachment can be hit or miss, one batch can come out lovely while the next batch couldn’t get even a little frozen so an ice cream maker with a compressor is definitely worth the investment. The biggest factor with the attachment is that it’s exposed to the air temperature, which could make it near impossible to churn your ice cream if you live somewhere hot or the kitchen is too warm.

Now that we have a legit ice cream maker our possibilities are just endless and pretty soon we will be putting things like potato chips in our ice creams like Benny and Jerry. But another problem came up when researching some recipes for ice cream, that there were a good number of ice cream bases that tasty ice cream can come from. This whole time we thought that the French Custard was the best and only way to be making ice cream, yet we totally didn’t know for sure since we haven’t tried making any of the other kinds. We are talking about full fat, whole milk and cream kind of ice cream though, not healthy coconut milk or almond milk or substitutes of the sort. So this experiment is to find what ice cream base to use for the majority of our “Carlienne’s Creamery” creations. Here is a break down of the bases we made and what we think of it. All of them are sweet cream flavored with no other flavorings added (not even vanilla). We wanted to know what kind of starting point we have in order to make the flavors that we love for ourselves and for friends.

The most popular style of ice cream base and the one we were most familiar with. It is also one of the more challenging ones as it requires you to temper eggs which can be a very tricky thing.

Thoughts on the French Custard Base

While the French Custard is a wonderful ice cream base, we found the flavor of this simple sweet cream to have a mild eggy flavor (obviously) compared to the others. It had a wonderful texture during the scoop that we call a nice “break” and the color is definitely more yellow than the others. The French Custard is very rich and the mouthfeel was a nice coating on the tongue. Because of the egg-iness, this may impact the direction your going with a flavoring.

Similar to gelato but we don’t want to call it gelato although gelato just means ice cream in Italian so it’s gelato. Another cook to thicken kind of ice cream like the custard above except cornstarch is doing the thickening.

Thoughts on the Sicilian Method

The Sicilian Ice cream method is one of the ones that surprised me (Carl). I was very hesitant at first using cornstarch in an ice cream base because I just found it quite odd. I have used cornstarch in soups, sauces and fried things but in an ice cream? This style won the hearts of many in my household. It was very thick and rich and had a smooth almost sticky mouthfeel to eat, in a pleasant way. At first, I thought I didn’t execute this properly as it looked/felt like gelatin when I took it out of the fridge for churning. The texture and the mouthfeel on the Sicilian style base was definitely at the top of the list.

The Philadelphia (or Philly) Style is an eggless base named because of the many dairy farms that surrounded Philadelphia and not because the city is known specifically for its ice cream. This is the simplest of all the bases as all you have to do is combine all the ingredients and churn.

Thoughts on the Philadelphia Style Ice Cream Base

With the lack of eggs or cornstarch this base freezes very hard so it is important to let it sit out for a few minutes before scooping/serving or you’ll be breaking some spoons. The texture and the light flavor gives me the feeling of something old time-y like an old school ice cream parlor type of mood. The Philadelphia has a fairly neutral flavor, but if this is your go-to base, then your ingredients need to be as wholesome and straight from the source as can be. Of course, also having the best quality in the other ingredients will be important for this base since it has such a clean flavor. This base does melt very fast and reminded us of the typical ice cream found in Japan, which is more comparable to the texture of our soft serve here in the States. Which makes sense, since Japan can get really great quality dairy like Hokkaido milk and cream which would make this style pretty appropriate.

Sort of an unknown when it comes to ice cream bases and only on the radar of those that own the Ben & Jerry’s ice cream book (we do not and found this fun fact out only after the experiment). If you have the book you will see one of the sweet cream bases call for uncooked eggs. Now this alarms many people (rightfully so because raw eggs can contain salmonella and cause food poisoning) which isn’t a pleasant party after eating ice cream. It’s really important to pasteurize your eggs for this recipe so it becomes a little safer to consume raw – unless you really like to live dangerously! You’re also wondering why we spelled French wrong in the name of this base but we didn’t, there’s no real name for this style so feel free to call it what you want but it takes the easy assembling of a Philadelphia with some richness of eggs like the French Custard.

Thoughts on the Uncooked Ph-rench Method

The Uncooked Ph-rench base doesn’t freeze as hard as the others but it does melt fairly quickly. It has a wonderful break when scooping and a fluffy texture. Uncooked Ph-rench has a milder milk flavor than the Philadelphia style but the flavor becomes more pronounced when melted. The fluffiness is wonderful and such a pleasant ice cream texture by appearance and taste/mouthfeel brings it to the top of my list as well. The egg flavor is not even close to being as pronounced as in the French custard and it seems to impact the texture more than the flavor which is a great thing because you can control the direction of the flavor you are going for much easier than the French custard eggy style.

Having tried all these bases, honestly, makes it even more difficult to pick just one style for future Carlienne Creamery creations. Since these bases have their strengths and weaknesses we are adopting more of a “choosing the right base” for the particular flavor we will be creating. A Sicilian style base would be great for bold rich flavors since the texture and mouthfeel would keep the flavor long-lasting like chocolate, coffee, toffee, matcha, or cinnamon. Philly would be a great style for milder or subtle flavors like a champagne, sake or a peach flavor. The Uncooked Ph-rench style would be an all around great base for anything especially with some of the toppings or mix-ins type of ice creams like cookie dough or Oreo (say “or Oreo” ten time fast) or even maybe a swirl. The French custard style would obviously make a great French Vanilla, but also could be along the lines of a Sicilian where you’d want deep rich flavors and would also be great with mix-ins or toppings where there Sicilian with mix-ins might be texturally overwhelming. That is our take on these bases and we really hope you learned as much as we did. We can’t wait to get our ice cream creations going now!

*I am a participant in the Amazon Services LLC Associates Program, an affiliate advertising program designed to provide a means for us to earn fees by linking to